SHC Reaction – Dunbar delighted to be back 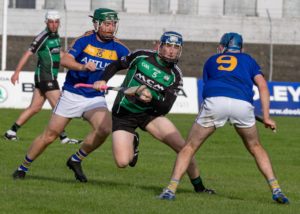 AS a Carlow inter-county and club player, Ruairi Dunbar, may have thought he had seen it all as he looked forward to the 2020 club championships. Then Covid intervened and now the clubs are playing in front of a handful of people while the dressing rooms are closed to the players.

Yet here was the holder of two Christy Ring Cup medals (2008 and 2009) back doing what he does best. He was making is presence felt but then got himself booked. After that he picked up an injury which required extensive treatment.

While he was being tended to, referee Paud O’Dwyer, stood closely by with what looked like his notebook in his hand. Was he waiting to give the injured Ballinkillen player a second yellow? As it turned out he wasn’t and Dunbar lasted for three quarters of the game before making way for fresh legs. It would surely have been a killer if he had been sent off. Especially when he, like all the players, had waited so long to get back into action again. It didn’t matter that the ground capacity was 200 maximum.

“It was totally different and very strange. Maybe, at the best of times we haven’t played in front of too many people but everybody is happy with this tonight,” said Dunbar who was appreciative of all the work that has gone in to allow the players get to play a championship.

“Everything was in place and hopefully all this keeps going. You go back to what you do. You cannot be afraid to go into tackles. You don’t think that way. Whatever happens, you have to play as you would normally play. Lads revert to type. You cannot change habits and we still have those cuts and bruises,” he said happily.

Gavin Nolan, the Bagenalstown manager was despondent with his side’s performance but was not totally deflated.

“That is senior hurling. We were a bit slow out of the blocks. We have a lot of lads coming up and I suppose it is up to us to regroup as a panel and as a team. We have St Mullins in ten days’ time. It is disappointing. We have a lot to learn. We hurled very well in patches and didn’t hurl very well at other times. It is a matter of getting back to the drawing board and preparing for St Mullins on Tuesday week,” he said.