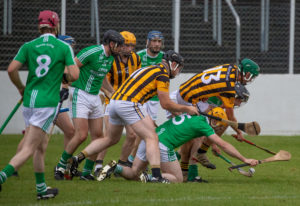 Players from St. Mullins and Naomh Eoin battle for the sliotar. Photo: michaelorourkephotography.ie

NAOMH Eoin manager, Colin Keeling, was not a happy man after the game as he criticised the referee, Patrick Murphy, for a poor performance. Certainly a lot of verbals came in the direction of the All-Ireland referee from Myshall voices in the first half. There was no telling them these things even themselves out over a season if not the game itself.

“To tell you the truth the referee didn’t help us in the first half,” said Colin Keeling, the Naomh Eoin manager.

“He was scandalous to tell you the truth. We were in for a goal and didn’t get a free. He handed them 1-3. It is a big swing in games like that.”

Having made his point about the match official Keeling said all was not lost yet and that he was happy with his side’s performance up until the last quarter.

“I think we lost our way a little bit and lost our shape. I would be happy enough except for the last 15 minutes. You would expect them to come out on top. They were in a Leinster club championship final last year.

“We have young lads but they are not bad young fellas. We will take each game as it is. Our goal is to get to a semi-final. We can’t get there tonight, the next night we still can’t get there but we might get a step closer.”

On the other hand it seems like light years ago to last October when Jason O’Neill scored the winning point for St Mullins in the county final. A lot has happened both on the field and off it since then.

“It is great to be back. The last few weeks have been crazy haven’t they?’ noted O’Neill.

“The last few weeks it is getting back to normal. We have to try new things too. The boys are training hard and fight hard for starting spots.”

He didn’t feel there was a sense of having to struggle to get up to speed.

“I don’t think so. We are starting fresh. It is great to get stuck back in and we will have to wait and see where the year is going to go for us. Naomh Eoin are a tough team. They came out strong and we were delighted to get the win.”