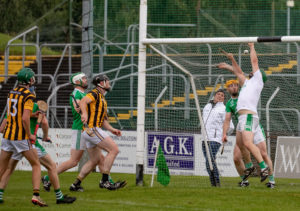 COVID-19 may have generated an unknown factor in the lead up to the opening game of this year’s senior hurling championship at Netwatch Cullen Park but all that was forgotten when referee, Patrick Murphy, threw in the sliotar on Friday evening.

St Mullins are the reigning champions but their old rivals who have not been as successful in recent years asked some serious questions and let it be known they were not going to roll over easily.

The challengers got off to a good start when John Michael Nolan slotted over but then James Doyle ran at the Naomh Eoin defence and found the net from 20 metres out with a low shot to the bottom right hand corner of the net.

It looked ominous at that stage particularly when Marty Kavanagh added a point.

Naomh Eoin did well to ignore those set-backs and Cathal Treacy converted a free and added a ‘65 after he had been denied by a brilliant diving save from Kevin Kehoe in the Mullins goal.

On 12 minutes, Oisin Kelly levelled the game and in reply Kavanagh converted a long-range free for the champions.

Naomh Eoin threatened all through the first half but their goal was a soft concession when the St Mullins keeper allowed a long-range free from his opposite number, Brian Treacy to drop over the line to give Naomh Eoin a two-point lead.

The Myshall side enjoyed an edge in the second quarter but they needed to capitalise on the scoreboard.

Martin Clowry and Nolan pointed but at the other end James Doyle and Kavanagh kept the St Mullins end up raising two white flags in succession. By half-time the sides were tied at 1-8 each with the challengers surely feeling they should have been ahead. Then again, their keeper showed his athleticism when diving to deflect a Paddy Boland effort around the post. 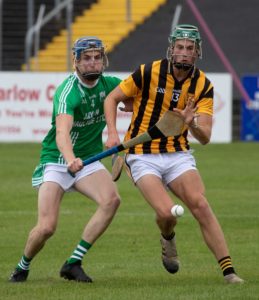 It was tight in the third quarter. Some of the hits were borderline fouls as Naomh Eoin tried to lay down a marker while the 2019 Leinster senior club finalists know a thing or two about looking after themselves.

13 minutes into the second half the sides were tied at 1-10 each. From underneath the stand, Jason O’Neill converted a fabulous side-line cut to edge Mullins back in front. James Doyle then found space down the right wing and spotted Oisin Ryan unmarked on the 13 metre line in front of goal. The off-load was marginally high. The ball receiver went for broke and instead of trying to secure possession he pulled in mid-air. His contact was good and the ball found the net.

That was crucial. Reigning champions tend to have the knowledge to know how to win games from there as opposition confidence is dented. And so it transpired. Inch by inch St Mullins killed off the Naomh Eoin challenge. A nine-point margin at the end was harsh but that is what good sides do if given the opportunity to do so.