Guitarist Shane to perform at online folk festival in the USA 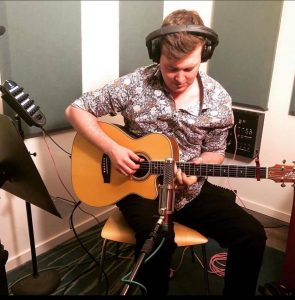 CARLOW’S Shane Hennessy has been selected among 18 Irish musical acts scheduled to perform virtually at the Philadelphia Folk Festival with the support of Culture Ireland.

For the first time ever the festival has dedicated a full day of its programme to performances by Irish musicians, with virtuoso guitarist, songwriter and composer Shane among those taking centre stage.

Scheduled to run for 12 hours on Saturday 15 August at the 59th Philadelphia Folk Festival, the set will include 18 of Ireland’s finest music acts

The performers at the festival include artists who would normally be headlining US summer festivals such as We Banjo 3, Téada, and Moxie along with emerging bands such as The Ocelots, Corner Boy and Karrie with Jimmy Smyth.

Over recent months, Culture Ireland has successfully presented 120 online concerts through Ireland Performs. This initiative to present a digital festival stage with Philadelphia Folk Festival, the oldest continually running outdoor festival in North America, is a further step to ensure that Irish artists are supported to continue to reach a global audience.

Shane has held sold-out solo tours in Europe, Russia and the USA and regularly appears at major international music festivals, including the prestigious MerleFest.

His most recent album Rain Dance has been hailed as “a triumphant reaffirmation of his virtuosity and compositional excellence” by Irish Music Magazine (July 2020). He also been described by legendary guitarist Tommy Emmanuel as “a brilliant entertainer and an amazing musician, who transcends the guitar the same way Muhammad Ali transcended boxing”.

Tickets for the festival are available from folkfest.org starting at $25 for one day and may be acquired without any geographic restrictions.