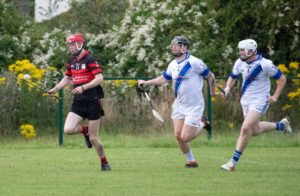 IT’S good to be back. There was lot to enjoy at in Carlow town on Friday night as the Intermediate Hurling Championship threw-in.

The score board paints an unfair reflection on what had been a competitive game for so long.

However, the home side were to rue their indiscipline and the impact of second half substitutes which saw a clinical Rangers grab 3-7 in 20 minutes and victory.

The opening quarter was an even encounter with Carlow Town and Rangers going tit for tat for points although both sides showed some signs of rust in attack.

Rangers appeared to be cycling up through the gears when full forward John Coady blasted over the bar after a clever flick on by his forward partner, Dean Tobin, making it 0-4 to 0-2 after 20 minutes.

However, Carlow Town responded well and things began to click with half forward Cian Clancy being a constant threat along with marauding midfielder Conor Lawlor.

Clancy nailed a ’65 and a fine point, on turn over his right shoulder, in quick succession to draw level.

It was a tight affair on the scoreboard but Rangers lost forward Luke Roche following a straight red to give Carlow Town a further boost at half time, as the home side led 0-7 and 0-6.

Clancy grabbed the first point of the second half but Rangers responded quickly, John Coady leading the charge.

Rangers attack became more incisive in the second half and they weren’t shy going for goals.

Carlow Town coughed up two cheap frees around the 40 minute mark that allowed Rangers to draw level through the precision of Coady.

Worse was to come when corner back Paul McGelligott was sent off and Rangers showed their teeth.

Corner forward Dean Tobin gave Rangers the lead after a fine solo effort before substitute Ciaran Kavanagh fired an unstoppable shot high into the net for the game’s first goal.

The heads dropped for the home side as Rangers defender Craig Lawlor extended the lead to six.

Rangers were not in charitable mood and Kavanagh and fellow sub Dean Grennan slotted late goals as the away side ran out comfortable victors despite a late consolation goal by Conor Lawlor.