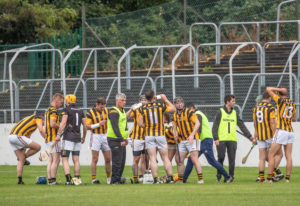 A water break during the opening SHC match between St. Mullins and Naomh Eoin. Photo: michaelorourkephotography.ie

If they are serious about making a challenge for senior honours this year Ballinkillen have to get the balance right here.

Last year they had St Mullins by the throat in the county semi-final but a series of errors saw Marty Kavanagh score the equalising goal and St Mullins prevailed in extra-time.

It is early days in the championship but players like Sean Murphy, Craig Wall, Ciaran Whelan and Daryl Roberts have to stand up to the tried and trusted St Mullins leaders such as Marty Kavanagh, James Doyle, Paul Doyle and Seamus Murphy of St Mullins.

The trouble for all challengers the wheel never seems to turn as St Mullins continue to pick off county titles and, apart from ability, this is the expectation, which Ballinkillen are facing and have to fight against.

If ever there was a time for Naomh Eoin to beat their arch rivals then, this weekend is the time to do it. Having had a rest day last weekend, Rangers will be going in cold into the second round but looking at how Naomh Eoin finished against St Mullins it is hard to make a case for the Myshall side.

When push came to shove Naomh Eoin were found wanting. Now after losing the 2019 county final in the last puck of the game a hurt and impatient Rangers team are looking to go all the way this year. Naomh Eoin stand in their way and could be swept aside.

Both these sides scored 3-15 a piece in their respective opening games over the weekend. Does something have to give here? Maybe not. These sides have history of draws but going on the toss of a coin perhaps Naomh Eoin get the nod

If St Mullins do what they did last year and keep a strong and experienced squad at junior level then they could be vulnerable here. It is still hard to make a case for Carlow Town and they might not travel well either.