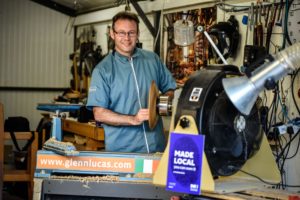 A CELEBRATED Carlow craftmaker has rowed in behind a national campaign aimed at boosting the Irish craft industry.

Glenn Lucas of Glenn Lucas Woodturning, based in Flander’s Cross, Knockclonegad, Bagenalstown has joined with craftmakers around the country to support #MADELOCAL.

The Made Local campaign, developed by the Design & Crafts Council Ireland (DCCI), is a nationwide initiative to boost sales and drive revenue for both makers and retailers.

The campaign was officially launched this week by tánaiste Leo Varadkar, along with actress and writer Amy Huberman.

“As a craftmaker I am delighted that the craft and design industry in Ireland is being recognised and supported during what has been a very difficult time,” said Glenn.

“Craftspeople play a vital role in the Irish economy and as part of that community I feel that the Made Local campaign could not have come at a more important time. I hope this campaign encourages consumers to shop local and consider the beautiful Irish-crafted, high-quality products that myself and other Irish designers and makers create, while in turn helping to keep the craft industry in Ireland alive,” he added.

Recent research conducted by DCCI has indicated that nine out of ten consumers feel an affinity to Irish craft and design. DCCI’s ambition is that the Made Local campaign will remind consumers who are holidaying in Ireland this year of the high-quality, unique products available from craftmakers and designers across the country.

Consumers will see the newly-designed Made Local symbol in participating retailers when shopping for gifts and keepsakes during their holidays.

The Made Local campaign will run throughout the summer, with 100 retailers involved in the campaign supporting the work of DCCI’s 3,000 registered clients.

For more information on Irish craft and design and where to buy products that are Made Local, visit www.dcci.ie or join the conversation by following #MADELOCAL.