Community defibrillator was vital in saving a life at service station 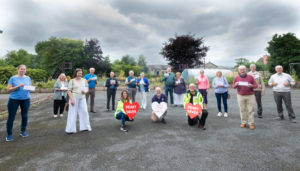 A STRONG sense of community spirit and a determination to help has resulted in a life saved, thanks to the residents of Highfield, Dublin Road, Carlow.

A defibrillator purchased by Highfield Residents’ Association and mounted on the wall at Circle K, Dublin Road was recently used to assist a person in serious cardiac arrest.

The vital equipment managed to keep the causality in a stable condition until emergency services arrived, ultimately saving a life.

“The defibrillator they purchased through fundraising and some grants has been used to save one life already,” explained William Paton of Carlow Community First Responders (CCFR) committee.

“My understanding is that a member of An Garda Síochána used the equipment, but the very fact it was there saved a life,” he added.

A total of 26 residents from Highfield and adjoining estates completed training in CPR and how to support victims of choking episodes. The training is supported by the America Heart Association and the Irish Heart Foundation, an internationally recognised process, which requires refreshing every two years.

“There are 62 houses in the estate and 25 people completed the training so that was a great response from the residents here,” said Michael Roberts from Highfield.

“Thanks to support from Carlow Lions Club and Carlow County Council we were able to purchase the defibrillator and that is available all the time, 24/7, at Circle K; that hasn’t been effected by Covid at all. We are very grateful to Circle K for agreeing to host it,” added Michael.

The Highfield participants completed their training last October, but Covid-19 meant there hasn’t been an opportunity to present them with their certification.

Last week, the participants came together for a socially distanced presentation in An Gairdín Beo, a chance to recognise their willingness to offer vital help when people need it most and an acknowledgment of how their efforts have already saved one life.

“I would like to congratulate the group and acknowledge their efforts. The defibrillator at Circle K is the only public-access defibrillator in Carlow town without a code; the ones at the council offices, Visual, New Oak Community Centre and St Joseph’s NS all have codes,” said cllr Paton.

It is understood that access codes are used to prevent vandalism.

Cllr Paton confirmed that while CCFR and its groups around the county had to stand down during the pandemic, enthusiasm has certainly not waned, with many groups eager to get back up and running when it’s deemed safe to do so.

“Groups in Carlow and Tullow are currently back training and a group in Tinryland and Bourlum Wood, Carlow is ready to launch when it’s safe to do so. We are also working away in the background and have earmarked getting groups together in Ballinabranna, Old Leighlin, Leighlinbridge and Ballon. Hopefully we will get two active groups from that,” he enthused.