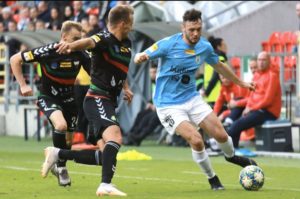 Eric Molloy on the attack with his former team, Poland’s Stomil Olsztyn

IT’S been a tumultuous few months for Rathvilly man Eric Molloy. There were high hopes that he could kick on and ignite his career following his move to Poland where he signed a professional contract with second division side, Stomil Olsztyn.

“I was very excited to move to a new country, new culture and into full time professional football. I was looking forward to putting in hard work, making new friends and ultimately playing football at a good level which I love.

“I did quite well despite joining the club five/six games into their season with a good cup run that saw me play all games. We lost in a penalty shoot out and just missed the chance to reach the quarter finals, which would have been the club’s first in history.”

After returning to Poland after the winter break, the Covid-19 outbreak and ensuing lockdown meant the game was called to a halt, something Molloy was grateful for. “It allowed me to recover fully and get stronger from a tough training schedule and games in preparation for the second round of matches.”

He used the lockdown period to change his training regime and eating pattern to improve his fitness levels for the better. Once lockdown was lifted and the game returned, Molloy had hoped that this was his chance to kick on. However, less than two months later, things took a turn for the Rathvilly native as he returned home recently following the end of his contract on the 30 June, opting not to sign an extension.

There is more to his exit than meets the eye. Molloy admitted to the ***Nationalist Sport*** that due to the terms of his contract he couldn’t speak about the nature of his exit.

“I signed in Poland because I was on a trial out there and there were different personnel in charge in the club and different people involved. Everything was going well but then there were changes that happened within the club. I signed in Poland because of what I had seen on trial, how professional things were here, the standard, my team mates and how I was treated since the first moment I arrived over. There was a change then in personnel in the club and things changed for me.”

As these changes occurred, Molloy became increasingly frustrated and wasn’t as happy as before Christmas.

“I was still working very hard, playing really well in training, I think I scored five goals and two-three assists in five training games. My contract was getting close to running out I was offered a new contract extension for a year which a few players didn’t get. It just shows that my hard work and football abilities is something the club still wanted. After a lot of thinking and hard decisions I declined the contract extension as I decided I needed a new challenge at this time of my career. It was a difficult decision. So I recently arrived home and I am a free agent.”

Following his exit, Molloy is trying to stay optimistic and focus on his next adventure. He is utilising his contacts and has a plan as he searches for his next opportunity.

“I’ve made a highlights reel as not many people will have seen me play over the last year or so or seen any live videos of me, I’ve been in touch with anyone I’ve known through football before and just letting them know my situation and seeing what’s out there and what clubs are looking for someone. I’m looking at signing with an agency too, that may be a possibility.

“I’m trying to figure out what to do next and what is best now. League of Ireland is back soon, there is a possibility that I can stay here in Ireland because you can get good game time and I could really play here. However, there are other leagues outside of Ireland that are starting back soon too so there are options. If the option is there, I’ll be on the first flight out on the weekend.”