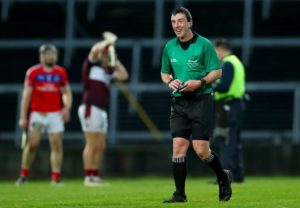 Earliest sporting memory:  Playing hurling and football with my home club in Wexford, Rathgarogue/Cushinstown.  Earliest memory was losing an under-12 county final when I was 10.

Earliest memory of watching games was seeing Wexford beat Kilkenny in the 1981 Leinster semi-final with Tony Doran dominating and then the pain of seeing them lose the Leinster final to Offaly.

Memorable sporting moments: Playing wise there are a few.  Winning the Wexford intermediate hurling and football championships on consecutive Sundays with Cushinstown when I was still a minor.  Then winning the Carlow senior football final with Palatine in 2006 after many near misses and heartbreaks was huge.  To finally get over the line was a massive relief and gave huge satisfaction to many.  I played in nine senior football finals, losing five, drawing three and winning only the but at least I have that one medal.  Winning the Carlow Junior Hurling in 2001 in Palatine’s first year back hurling for ages after Paul Treacy and myself got the club back hurling was hugely satisfying.

On the refereeing front they are also a few.  Reffing the 2010 Carlow SFC final in only my third ever senior game was great.  Reffing my first Carlow SHC final in 2011 was also significant, and it turned out to be great game full of incidents to make it better.  Starting off reffing, my goal was to ref in Croke Park and I got to do that for the first time in 2012 in the Nicky Rackard final.  Being appointed to the 2015 All-Ireland minor final, 2017 All-Ireland U-21 final and the 2018 All-Ireland club final replay were all nice memories as was doing last year’s Munster senior final in a heaving Gaelic Grounds in Limerick.

Biggest influence on career: My mother, Bridget.  She played ladies football and camogie for Wexford winning two All-Ireland senior camogie medals.  She was always hugely supportive and very honest with me throughout both my playing and refereeing career.

I had a great teacher in Good Counsel College in New Ross, Aidan O’Brien who was very influential on me growing up and still is.  From the refereeing side, Barry Kelly would be someone I have looked up to and who has always been very helpful to me to this day.  My umpires, John Kelly Tommy Fitzharris Paul Treacy and Gerry O’Neill, who have been with me since I started reffing also influence me a lot as we have been a team together now for over ten years.

Sporting Hero: Growing up in Wexford, it was George O’Connor in hurling and Louis Rafter in football.  My main sporting hero would have to be Roy Keane who drove Manchester United and Ireland for a decade.  Never has there been a more influential Irish sports star.  I also have always hugely admired Tommy Walsh, Brian Lohan, Paul Galvin and Kieran McGeeney.

Most difficult refereeing sporting moment: The 2015 All-Ireland minor final.  The appointment for the final for myself and my umpires was hugely satisfying and the days leading into the game were very enjoyable until I got the phone call when in the hotel in Dublin on the night before the game to say that my mother had passed away. My family insisted on the incredibly difficult decision to go ahead and ref the game the next day as it would have been what my mother would have wanted.  Thankfully the game went well as she probably would have haunted me if it didn’t.

If I could turn back the clock: From my playing career I’d go back to the last minute of the 2007 senior football final when we were leading Éire Óg by a point and we conceded a dubious free (aren’t they all) for them to send the game to a replay which they won. Also the 2006 Intermediate Hurling Final v St Mullins where we just came up short in our best chance to win the Intermediate.  We lost three Intermediate hurling finals that decade. From my refereeing side, if I could turn back the clock I would have started the 2011 senior hurling final 10 seconds earlier which would have prevented a 30 man melee.  Similar in the 2015 senior hurling semi-final where I wish I had have blown up the game 30 seconds earlier which also would have prevented another 30 man melee.  Also in last year’s Munster Final if I could turn back the clock I would have produced a couple of red cards which by not doing so probably cost me last year’s All-Ireland final.

Your favourite holiday:  Honeymoon with my wife Myra in Koh Samui which was idyllic or a beautiful campsite near Venice that my wife, three daughters and myself went to a few years ago.

Memories outside sport: The birth of my three daughters Alannah, Sarah and Maiyah.  They keep me grounded.

Favourite bar/restaurant:  Favourite bars are Tully’s Bar (both in Carlow and Waterford) and Whelan’s of Wexford Street in Dublin.  Favourite Restaurant is The Devils Menu in Graiguenamanagh – a great and different eating experience with fantastic food.

What would be heaven for you: Refereeing this year’s All Ireland hurling final after watching Carlow win the Joe McDonagh Final in the game before, with my wife and daughters in the stand knowing that Palatine had won this year’s senior football and junior hurling championships.  I’d retire a very happy man if that all comes to pass.