Lennon thrilled to be back at the Oche 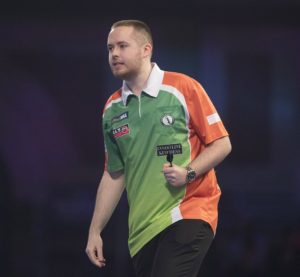 AFTER five months of lockdown Carlow town’s Steve Lennon returned to the oche last week for a competitive tournament.

He competed in the newly formed Summer Series in Milton Keynes which took place from Wednesday through Sunday. The tournament consisted of an amalgamation of five different Players Championship tournaments squeezed into a week.

Steve said it was good to get back to action but admitted it was tough.

“It was good to be back. It was so weird as it had been well over 16 weeks since anyone had really played any competitive darts so it was nervy enough at the start. We’ve never actually played five days of tournaments consecutively before so it was weird. It was fine to play but can be mentally tough if things aren’t going your way after a few days,” he told ***Nationalist Sport***.

It was a slightly disappointing week for Lennon who suffered a series of second round exits and felt that he wasn’t playing as well as he was before the lockdown. However, he is trying to see the positives.

“I played okay, not as good as I had been playing before the lockdown but I thing that really was down to a lack of competitive practice. I got to the 2nd round of 4 occasions. It was not the worst that could have happened; I picked up crucial ranking money so that does help a lot, especially as it’s still unclear when darts will return to normal.

“It was a new setup to get used. But if darts is to return in the same manner I will be more familiar with the setup so I feel I can learn from my mistakes. I still know I’m playing quite well. I’m just hoping it won’t be too long of a wait before tournaments are back on the calendar. We still don’t know what’s happening yet with the rest of the year’s calendar so all I can do is continue to practice and hope soon I’ll be back to the pro tour.”

Lennon admitted that there were regulations in place for the tournament to combat the spread of Covid-19. “The airport was quiet enough which was so strange to see but nothing different except for having to wear a mask. For the pro tours, we all had to get tested for Covid-19 and once we’ve tested negative we can take part in the events but must remain within the hotel ‘bubble’ (which is basically your hotel room and the venue, quite the same as how it was done for the snooker events) It’s a new setup to get used to but it’s just good to be back playing events. There’s no audience either which is odd. There’s now a 14-day quarantine now that I’m home.”

After five months of no competitive darts, Lennon was looking forward to a new normal after he missed out on the opportunity to play in the Home Tour, a tournament created for PDC players to play from home. “Lockdown was fine, it was nice to do nothing for a while but then again it’s nice to get some sort of normality back into my life. I wanted to play the Home Tour, it’s just a pity I couldn’t meet the criteria to be able to play in it but then again I don’t play online darts anyway so it didn’t frustrate me too much. I just kept up my own practice at home and I was happy enough with that.”