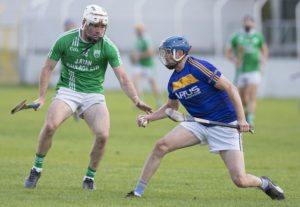 THE senior hurling championship was burst wide open in Netwatch Cullen Park on Friday night when Ballinkillen put the holders to the sword with relative ease.

David English, Ruairi Dunbar, Sean Murphy and Daryl Roberts are seasoned players at club and intercounty level but the age profile of the rest of the Ballinkillen team is relatively low.

They are learning quickly though and to do what they did here will surely fill them full of confidence as the season progresses.

Admittedly St Mullins lost Carlow intercounty player, James Doyle, on 28 minutes but by that stage the challengers were posing questions.

Ballinkillen had to be mentally strong when they fell into a 0-4 to 0-1 deficit early on.

Three frees from Marty Kavanagh and a wonderful long range effort from his brother, Jack, into the O’Hanrahan’s end of the ground suggested St Mullins were going to win with a bit to spare.

Ballinkillen didn’t panic. The played a game plan which required quick transfer of the sliotar which they exectuted well.

St Mullins had to be on their toes but they struggled.

Sean Murphy won a mountain of ball up front for the underdogs. He was also winning mini-battles further out the field but he had to be thankful to a young Ciaran Whelan who gave him a great pass for Ballinkillen’s opening point in the 8th minute.

Ballinkillen had a half goal chance when Daryl Roberts was smothered by an eager defence on 15 minutes. When the ball ran loose Marty Dalton collected but shot wide.

For St Mullins one wonders what Marty Kavanagh was thinking when he went for goal from a 40 metre while seconds later he had an easy point for the taking but again his goal bound shot was dealt with by the Ballinkillen defence.

Coming up to half-time Jack Kavanagh scored two almost identical points from half-way for St Mullins but, with Ciaran Whelan picking off five first half points, the champions only led 0-9 to 0-7 at the interval.

St Mullins were sluggish after the interval. Within a minute they fell behind to a Marty Dalton goal when the corner forward was at the end of an attack that started almost on their own goal line in front of the tunnel. While Jason O’Neill battled hard to earn St Mullins an equaliser the tide was turning. A point from a free by Whelan was followed by another from play by the same player.

Nine minutes into the second half Ballinkillen took the game by the scruff of the neck when Roberts put in Dalton for his second goal. The scorer followed with a point. Ballinkillen were not going to be caught now and they upped the ante with each passing minute.

There was no way Ballinkillen were going to lose when Sean Murphy’s effort for a point found the net instead. Their full-back line dealt with everything that was thrown at them in the final minutes. St Mullins were not allowed to hit back. Let the hare sit now. The Carlow senior hurling championship has taken an interesting turn.