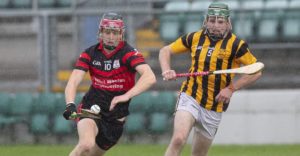 MATCH officials, John Hickey, and his linesman, Martin Murphy, surely got it wrong in Netwatch Cullen Park on Saturday when two Naomh Eoin players escaped straight red cards when they spear tackled Paul Coady to the ground in the opening quarter.

It shouldn’t happen but it would have been hard to avoid the ensuing melee involving about six players from each side. After the dust settled and the two match officials consulted with each other, Tony Lawler of Rangers and Micheál Mullins of Naomh Eoin were given yellow cards. It would be interesting to see the referee’s report as to why those two players were sanctioned accordingly. Presumably it was because of their involvement in the melee and not for the spear tackle.

The spear tackle looks as if it went unpunished in any case. There is a rule for referees to award red cards if they consider an opponent behaves in a dangerous manner towards an opponent. The tackle on Coady falls into this category and the Mt Leinster Rangers man was surely blessed not to have received a serious injury.

At that point Naomh Eoin led 0-2 to 0-1 with Cathal Treacy picking off an early free and following up with a point from play after Conor Foley had worked hard to get the ball to him. Rangers replied with a Jon Nolan sixth minute point.

Then came the Coady incident. Rangers may not have been asleep but they were fired up going into the second quarter. Brothers Jon and Chris Nolan, Eddie Byrne and Dean Tobin all added points as Rangers led 0-6 to 0-2 at the interval. Eddie Byrne’s score was an indication of the trust that exists between their players as Chris Nolan picked Byrne out with a clever cross-field even though he was well-marked.

There was no let-up from Rangers in the third quarter. 13 minutes into the second half they had added on a further six points. Apart from three from Nolan TJ Joyce, Kevin McDonald and Richie Coady all raised white flags.

Eventually Michael Kavanagh bridged a 40 minute gap to Naomh Eoin’s last score when he found the posts from near half-way on 44 minutes. It got better for them. A minute later a long range free into the Rangers small square was deflected past Dean Grennan by John Michael Nolan for a Naomh Eoin goal. Chris Nolan replied with a free for Rangers who then conceded another goal when the sliotar came off the left hand upright at the scoreboard end of the ground. Cathal Treacy reacted best when rifling home from the edge of the big square.

If Naomh Eoin were to take any form of positives out of the game it was possibly a ten minute spell after Micheál Mullins picked up his second yellow card on 35 minutes. That is clutching at straws however. Rangers were always going to have a spell where they didn’t have to fire on all cylinders.

After conceding those 46th and 49th minute goals, they tightened their grip on proceedings with Nolan increasing his personal total over the 60 minutes while substitute Denis Murphy also found the posts.

Further points from Treacy and John Michael were only crumbs from the masters table as Rangers continue to hold a tight reign on their arch rivals.