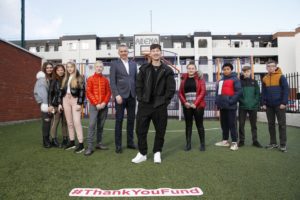 Marking a decade of support for youth-orientated non-profit groups across the island of Ireland, this year’s fund has been reimagined to help groups respond to the impact of Covid-19.

In recognition of the vulnerable and marginalised young people that have been disproportionately affected by the economic and socio-economic impact of the pandemic, Coca-Cola Thank You Fund grants totalling €50,000 will be awarded to charities, community and voluntary organisations and NGOs seeking support for initiatives targeted at supporting young people aged 16 to 25.

Originally from Summerhill in Dublin’s north inner-city, Barry Keoghan was involved in his own local community group before his meteoric rise to fame and credits the skills and supports he received during this time for his success today.

“I think we’re all a little overwhelmed at the moment, but for someone whose only support is their local youth group, this is a particularly difficult time,” said Barry.

“I know my own local community project in Dublin had a massive impact on me. It gave me the confidence to get to where I am today, so to have that connection taken from you when you need it most is scary. None of us really know what lies ahead, but youth groups provide a lifeline for young people right across Ireland – they’re the bridge between night and day at times, and the grants available through the Coca-Cola Thank You Fund will help them to provide the services that are changing the course of young Irish people’s lives for the better.”

Applications for funding can be made via www.coca-cola.ie/thankyou until midnight on Friday 25 September.

Leaders of the shortlisted projects will be invited to present their ideas remotely to a panel of judges in October. Successful 2020 Coca-Cola Thank You Fund recipients will be awarded funding in early November.