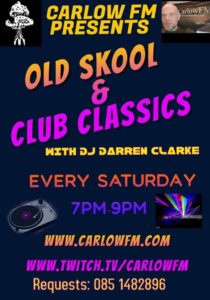 ONE of the biggest names on the Irish dance scene, DJ Mark Kavanagh, will be spinning the decks in Carlow this weekend for a live broadcast not to be missed. Mark will be joining Carlow DJ Darren Clarke for Darren’s show on the popular online station Carlow FM this Saturday night from 7pm to 9pm.

Darren’s weekly slot of Old Skool & Club Classics has been gathering quite the following so it comes as no surprise that he has bagged an appearance by one of the legends of the Irish dance scene. Mark’s appearance follows on from a very successful stint on Darren’s show a couple of weeks ago from DJ Pressure.

“Mark was part of the Irish dance music institution Sound Crowd and is a journalist, DJ and record producer,” explains Darren, a native of New Oak Estate Carlow. “It’ll be great to have him on as a special guest. He’ll play a mix set for the first hour, something exclusively for the show, and then we’ll have a chat … it’ll be great to have him in the studio.”

Darren has been DJing since he was 15, quickly becoming a familiar face back in the noughties on the decks at Archies and Scraggs Alley’s nightclub. Since then he’s DJ’d at all sorts of gigs both in Ireland and the UK.

On Carlow FM he gets the opportunity to play the music he loves best – old skool and club classics. “I know it’s an old saying, but they really don’t make them like they used to,” smiled Darren. “I love playing all the vinyl stuff, so that’s what I do; I don’t like playing CDs – they’re not the same as playing records.”

Lockdown has been a tough time for the DJ industry with so many events cancelled and venues closed, but it has also opened doors to other possibilities. “I’ve never listened to as much music in my life; it’s been great from that point of view,” he added.