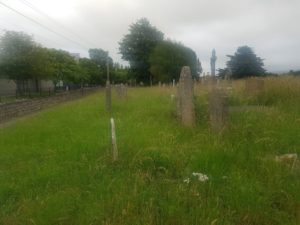 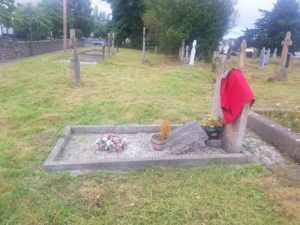 Before and after….The Mullawn Cemetery, Tullow was transformed thanks to the work of local volunteers

THREE Tullow graveyards of historical significance have been transformed in recent weeks, thanks to the perseverance and enthusiasm of local volunteers.

Cemeteries at The Mullawn, Ardristan and Leamaneh, Castlemore, Tullow had all become considerably overgrown, making them not only unsightly, but largely inaccessible to the public.

Both cemeteries at The Mullawn and Adristan hold particular historical significance in terms of the Rebellion of 1798. Many believe the famed Fr Murphy, who led the 1798 rebellion in Enniscorthy, is buried at The Mullawn cemetery; however, his grave is unknown.

Brendan Dowling, a member of the outdoor staff of Carlow Co Council in the Tullow area, was part of the team who completed the work on the cemeteries. Always a man who goes above and beyond for the Tullow community, Brendan gave his own time in the evenings to complete the work.

At the Mullawn, Brendan was joined by John Colgan, James Orbinski, George Murphy and Ger O’Neill, who all volunteered their time to restore the cemetery to its former glory.

The group also painted gates at the cemeteries in black oxide paint and planted suitable shrubs in The Mullawn.

“It was great to be able to do it and a big shout-out to all the volunteers who helped out,” said Brendan.

“We had a strimmer, but, ideally, if we had a lawnmower, maybe it would make a better job of it. Really, you’d never be done trying to keep it right,” he smiled.

“Look, if we had our way, you’d have a FAS worker maybe doing a couple of hours a week up there,” Brendan added.

While Tullow is eligible for six outdoor workers on various employment schemes –three on the Community Employment Scheme, two Tús workers and one on the Rural Social Scheme – the town currently has just two employed.

“Unfortunately, due to Covid, there is a reluctance to begin recruitment and for the two workers on the CE scheme the restrictions means they are limited in the type of work they can do and the time they can do it,” explained cllr William Paton.

“Our hands are tied at the moment in terms of recruitment.”

Cllr Paton pointed out that Tullow Tidy Towns is working alongside other volunteers and all this community effort ensures the town is looking its best.

“Volunteers from Tullow Tidy Towns carried out a WEE collection day last Saturday and then on Wednesday night volunteers were out picking litter in Pairc Mhuire, weeding beds in front of the fire station and pulling ragwort,” he added.

“All the various volunteers and groups work hand-in-glove with each other, which is how it should be,” cllr Paton enthused.