Tony Shannon was a keen golfer who loved a singsong 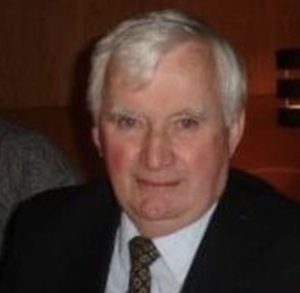 THE communities of Carlow and the Spanish Point area of Milltown Malbay, Co Clare were united in mourning at the passing on Tuesday 7 July at his home of Anthony (Tony) Shannon, Elm Park Drive, Rathnapish, Carlow.

Tony had been in declining health in recent years and was cared for at home throughout his illness by his loving wife Gretta – with the tremendous support of the HSE homecare team, thus fulfilling Tony’s wish to remain at home.

A proud Clare man, Tony grew up on a small farm close to Spanish Point in west Clare, the youngest in a family of seven. He attended his local national school at The Crosses of Annagh and then to secondary school in Ennistymon before going on to study agriculture at third level in Albert College, Glasnevin, then part of UCD.

Tony met his wife-to-be Gretta Skehill from Loughrea, Co Galway while they were both resident in Dublin; Gretta was working in the civil service at the time. The couple were married in Ranelagh, Dublin in 1965 before moving to Carlow, where Tony took up employment with An Foras Talúntais (AFT), now Teagasc, at the Oak Park Research Centre, Carlow. He was employed in the plant pathology department, spending his career carrying out research work on cereals (barley, oats and corn). This work afforded opportunities to work in various locations around Ireland, where he ran trials on crops and even included a stint in Saudi Arabia in the early 1980s, where a team from AFT successfully managed to grow cereals in the searing heat of the desert. Tony retired from Oak Park in 1995.

Tony loved sport, having played Gaelic football in his youth and later racquets and golf in Carlow. He was a keen GAA supporter and it was a great source of pride to him when his native Clare finally won the All-Ireland hurling title in 1995 after an 81-year wait and then again in 1997 and 2013.

Tony was a long-time member of Carlow Golf Club. He was an accomplished golfer and even managed to get his handicap down to single digits on one occasion. He was keen to get young people into the game and it has surprised the family to learn of the number of people who credit Tony with encouraging them to play the game, giving lessons to several of the local boys and girls who showed an interest. Tony served on many committees in Carlow Golf Club and managed a number of teams, including Senior Cup sides from the Deerpark club.

In 1983 he was thrilled to have his friend and former neighbour from Spanish Point, Dr Patrick Hillary, then president of Ireland, as a guest at Carlow Golf Club, where the president played a round on the famous course with Tony, the president’s son John, and Brian Mitchell, club captain at the time.

While Tony enjoyed his time on the golf course, he also greatly enjoyed the banter and craic associated with the game, which included a drink or two with his golfing friends in the clubhouse. Lifelong friendships were made both on and off the course during his long association with the club.

Tony loved Irish music and song. While he didn’t play an instrument, he would happily join a singsong and could be easily convinced to give a few verses of ***Spancil Hill***. He was a regular attendee at the Willie Clancy Summer Music Festival, held each July back in Tony’s home town of Milltown Malbay. Ironically, he passed away on the week in July that the 2020 Willie Clancy event should have gone ahead – Covid-19 meant that the music festival did not take place for the first time in its 47-year history.

Tony reposed in Healy’s Funeral Home, Pollerton Castle, with prayers being said by Fr Tom Little, PP, Askea-Bennekerry-Tinryland. His remains were removed to the Church of the Holy Family, Askea on Friday morning, 10 July, where Fr Little was chief celebrant, assisted by Fr Tommy Dillon, CC.

In a eulogy to his dad, son Gearoid said it was fortunate “that this current phase of the Covid lockdown has allowed us to come together for Tony’s funeral”. He welcomed those joining them on webcam, particularly Sr Teresa Shannon, Tony’s sister, watching live from Brisbane, Australia.

Gearoid continued: “Tony, or Anthony as he is known in Clare, has been a part of our lives as a son, brother, husband, uncle, father, grandfather, godfather, brother-in-law, neighbour, colleague, golf partner, a friend and so much more.”

The Shannon family had been overwhelmed with the expressions of sympathy, phone calls, sympathy cards, Mass cards, visitors to the house and condolences on rip.ie.

“Some of the lovely words used by sympathisers to describe Tony on rip.ie included: ‘a gentleman’, ‘a great character’, ‘a quiet gentle person’, ‘a fantastic neighbour’, ‘great fun to be with’, ‘a lovely man’, ‘a great work colleague’.”

Gearoid also described Tony as being “very funny with a sharp wit, who bore his illness with great courage. As his illness progressed, it slowly robbed him of his independence, his ability to live as he used to, but he never complained; he accepted it in his usual calm way. He had a strong faith”.

For the past 18 months, the family has had the support of the HSE homecare team, for which they will be eternally grateful.

Gearoid said there are extraordinary people working in the community caring for people, going quietly from house to house looking after the needs of those who can no longer do it for themselves.

“They carried out their work with incredible kindness, care and love to both Dad and Mam, for which I will be forever grateful. This support meant we were able to keep Tony at home, right to the end.”

He thanked Dr Gerard Moran and all the team at his practice for the kindness and compassion shown to Tony and their support of the family’s wish to keep him at home. Gearoid also extended thanks to Paul White and all at White’s Pharmacy for all the support given to the family over the years.

“To our neighbours in Rathnapish – present and former – for all the dinners, collections, deliveries, support and for just being there in a time of need.”

Tony’s funeral Mass was celebrated by Fr Little, assisted by Fr Dillon. Readings at Mass were by daughter-in-law Michelle and grandson Conor, with Prayers of the Faithful being recited by grandson Cian, while grandson Cillian brought forward the Offertory gifts.

The singing of hymns was by Bernard Hennessy, accompanied by organist Claire Cashin.

Following Mass, a guard of honour was given by Tony’s former colleagues in Teagasc/AFT and by members of Carlow Golf Club. Tony was laid to rest in St Mary’s Cemetery, with Fr Little reciting the final prayers at the graveside.