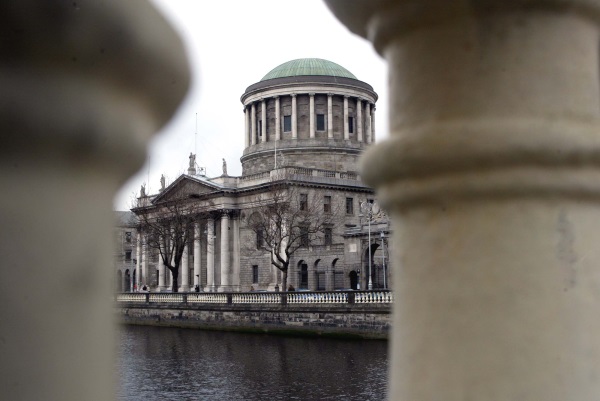 A notorious on-the-run con woman, who is the daughter of a wealthy property tycoon and is wanted in the UK for fleeing a trial, has told her High Court bail hearing that she is not a flight risk.

Farah Damji (54), with an address at Bachelor’s Walk, Dublin 1, appeared before Mr Justice Tony Hunt today, applying for bail in Ireland while she awaits the hearing of extradition proceedings brought against her in the UK.

Ms Damji fled to Ireland in February this year during her trial in which she was convicted in her absence by Southwark Crown Court in London for breaching a restraining order in April and June 2018.

Ms Damji is the daughter of a South African-born property tycoon and has a criminal record for fraud and theft stretching back to the 1990s.

Opposing the bail application, counsel for the State, Emily Farrell told Mr Justice Hunt that Ms Damji was a flight risk and that she had arrived in Ireland after obtaining false documents.

Detective Garda Eoin Kane said that Ms Damji was facing 27 months in prison in the UK for the restraining order breaches.

Det Garda Kane added that upon her arrest by gardaí in Dublin last month, Ms Damji gave the false name of ‘Anna Margaret Vignisdottir’, only admitting her true identity while in garda custody.

Det Garda Kane said that Ms Damji used a false name when opening her bank account and did the same when entering into a rental agreement at Bachelor’s Walk, saying she was “living under the radar”.

He added that Ms Damji was a flight-risk with no ties to Ireland and had entered only a short-term rental lease.

Ms Damji has six convictions for 28 offences, said Det Garda Kane, which included multiple theft and fraud offences dating back to 1995 and is currently under investigation for alleged offences under the Theft and Fraud Act.

Ms Farrell asked Det Garda Kane if Ms Damji claimed she was of limited means, to which he replied: “I wouldn’t accept that,” adding that she was in possession of a Rolex and Viking watch.

A UK psychiatrist’s report said that Ms Damji had contacted politicians and high-profile persons about her UK case, claiming unlawful detention, and had the corresponding documents, but he noted her “history of forgery”.

Ms Farrell also referenced a newspaper article describing Ms Damji’s father as a “property tycoon”, however, Mr Justice Hunt said he “wouldn’t believe everything in the Daily Telegraph”, describing it as a “Conservative rag”.

Barrister for Ms Damji, Leo Mulrooney, said that a diagnosis of PTSD had been offered by a psychiatrist’s report on his client.

Mr Mulrooney said there was a risk of her condition deteriorating in prison, as well as the potential risk of Covid-19, to which the judge said the Irish prison environment “was one of the safest in the world”.

Mr Mulrooney said that a “strong factor” in the application for bail was her record of her adherence to bail, in that Ms Damji had only one previous case of failing to appear against her.

“What I have is evidence that she disappeared in the middle of a trial,” responded Mr Justice Hunt.

Mr Mulrooney asked Det Garda Kane if video calls would be an effective way to monitor Ms Damji’s whereabouts, which he rejected as “unworkable”.

Mr Justice Hunt asked counsel about Ms Damji’s status and was told that she was born in Uganda but had only ever held a UK passport, which had been seized by UK authorities.

Mr Mulrooney said that since March, Ms Damji had been trying to regularise her position regarding the European Arrest Warrant with solicitors, with Ms Damji adding that she had been in contact with the Irish Refugee Council concerning her case.

Ms Damji also said that she had asked solicitors to write to the Department of Justice to notify authorities that she was in Ireland but that had not happened.

Ms Damji said that she had a breakdown during her trial in the UK and that she was told by her doctor not to attend court before saying it was difficult for her solicitors to take instructions while she was in custody.

Ms Damji said that she was surviving on cash she brought from the UK and profits from the sale of her artwork in Ireland.

She said there were “no hidden trust funds” from her father’s estate, adding that she also volunteered handing out meals to the homeless at the GPO on O’Connell Street in Dublin.

Ms Damji said she had outstanding cases regarding civil rights and property but that her GP’s letter said: “You should not go to court; you should stay home”.

“I was just completely triggered. The UK government was supposed to be protecting me, not persecuting me. I’ve an unlawful detention case for 15 months’ detention,” said Ms Damji.

She added that she did not use a false name on the rental agreement as she didn’t have one and that she was unsure if her landlord was a real landlord at all.

Ms Farrell told the court that Ms Damji had no ties to Ireland and that Ms Damji’s mother and children were in the UK.

Counsel said that Ms Damji accepts that she travelled on a false document and that the concern was that she had access to money, had an ability to move countries and that no conditions would satisfy objections to bail.

Mr Justice Hunt asked what funds were left with Ms Damji and was told by Mr Mulrooney that she had €5,000 in her flat and another €4,000 with her friend, which were available as bail money.

Mr Justice Hunt adjourned the matter to Thursday, September 3rd, for his decision on the bail application.