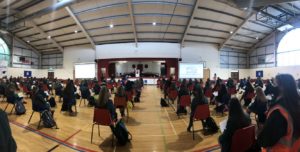 ST Leo’s College principal Niamh Broderick said she had received a groundswell of support after the college attracted often nasty criticism over a school assembly.

The college was among the very first schools in Ireland to reopen last Tuesday, with some national media in attendance.

However, the reporting of a school assembly and prayer service attended by 152 first years drew online scrutiny and criticism about the large gathering of students in one place.

A significant element of the criticism was directed at the Catholic school holding a prayer service in the first place. Minister for education Norma Foley later became involved and said she did not believe the school had been in contravention of any rules, but it would be best practice if students were kept in smaller numbers.

Principal Niamh Broderick said the assembly had been meticulously planned with “health, safety and wellbeing to the forefront of our thinking”.

“We adhered strictly to physical distancing guidelines, hygiene regulations, advice around ventilation and the wearing of masks in our huge school gym. Our Meitheal leaders and class tutors escorted the girls to their base classrooms after the assembly and they continued induction in smaller groups for the remainder of the week.”

She noted that a day after the incident, the Department of Education had issued amended guidelines which were “an acknowledgement of the previous lack of absolute clarity on the matter”.

“A good news story, a celebration of students finally returning to school and structured routine was partially soured by people who have little or no comprehension of the enormity of the thinking and work involved in preparing schools for the safe return of students,” she said.

Ms Broderick added that the “negative, misinformed narrative and nasty agenda to the side are not my business”.

She said she had received support from principals throughout Ireland who had planned similar year group assemblies in the belief that they were fully compliant. The principal also received messages of support and appreciation from parents, teachers and even complete strangers.

“I am focusing only on the positives; our first-year students and our Meitheal leaders were outstanding and looked beautiful in their green uniforms. I want to thank their parents for preparing them so well. My only sadness last Tuesday was that I could not see their smiles under the masks.”