GRAIGUECULLEN native, Kylie Murphy celebrated a huge milestone last Saturday when she made her 200th appearance for Women’s National League side, Wexford Youths. Although her team were beat by title rivals Shelbourne, Murphy marked the occasion with an equalising goal before Wexford were eventually beaten 2-1.

“It would have been a lot sweeter for me if we had the win but for me looking back now, it’s not about dampening my 200th game, it’s about the run up to the league and focusing on the result. If I’d scored to make it 1-0, I’d have been off celebrating in the corner but when it’s to level a game, for me, there’s nothing to celebrate, I just grab the ball out of the net and go again.”

She remarked that it was a shame that her 200th appearance couldn’t have fallen the previous week. “I got a special award given to me before my warm up by Eddie Cullen but that was it, I know last week ahead of the Galway game, the lads had put a lot of work into the match programme and being at home, it would have been nice but due to the Covid case we couldn’t but that’s the way it goes.” 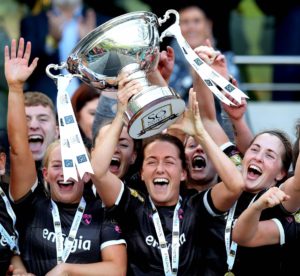 Kylie Murphy has enjoyed some wonderful success during her 200 games for Wexford Youths
Photo: ©INPHO/Ryan Byrne

Murphy’s dedication to the club and her resilience to keep going, especially during the early years is second to none, even missing her own honeymoon to go and play Champions League football. But what is it that has captivated her attention about the club and kept her going for the past nine years? “I can’t even say I’m slightly obsessed, I’m completely obsessed. To give that much dedication, that much to a sport and that much time to it, my whole life, you’ve really got to be loving it in order to keep going year in year out, it’s not easy. It’s just the love of the game.”

Murphy joined the Youths back in 2011 in their first season in the league during what was a difficult time for her relationship with sport. She became their first ever player to sign for the club and instantly felt at home. “It was just a phone call from John Flood, he was the manager at the time. He called to say that there was a new Women’s National League and that Wexford were putting a team in and would I be interested in coming down for a trial. I hadn’t been playing sport for a long time, I had just recently gotten back playing football with Graigue He rang, said no pressure but we’d love you to come down and see what you think. The first day I went down and loved it, it was like it had reignited a bit of passion in me with the sport and I signed that very first day.”

Upon signing, Murphy realised that it was a huge step up from what she was used to. “It was hard, it was a process. For me, it’s normal now, it’s part of my lifestyle. It was hard to say goodbye to the football too, I remember John sitting me down and telling me I had to choose between them. He said you can’t excel at soccer if you’re still playing football and vice versa. That was hard to step away from the team because they’re your friends, your parish, people I knew whereas Wexford was a new team. I was upset and angry at the time but in hindsight, it was the best decision I ever made. They were right, I was going from one to the other, I was drained, I couldn’t focus properly.”

Within three weeks, she was offered the captaincy. “It was a little bit [of a surprise] because I was new and John had been around most of the other girls he signed as he had coached some of them on different teams and he knew them and I was just new coming in so I was absolutely shocked. I was thrilled, to captain a team like that was amazing, I thought I must be doing something right! We were doing a photoshoot for the WNL and he took me aside and said `I want to make you captain and gave me a few compliments and that was that.”

She won her first trophy in her third season at the club, the WNL Trophy before going on to win the treble the following season. “It was amazing, no matter what anyone says, the league is the big one and it’s fantastic, the FAI Cup is amazing, the media coverage and your family coming up to it, the day out at the Aviva, but the league is what you want as it gives you Champions League soccer which is on a whole different level. The early days were tough though, we were the shit of the league, there were articles written about us, saying that we were only there to make up the numbers. I just knew there was a winning team there, I could feel it, there was a core group dedicated to getting Wexford Youths to the next level. I could see the way we were when we were losing and when we were winning, the work ethos was incredible.”

Her first Champions League appearance came the following season, an experience she described as “surreal”. “We were off to Poland, even getting on a plane with the girls was a surreal experience. It was amazing. It’s a very heavy week though, you play three games and it’s not three National League games, you’re playing teams who are semi professional and know what they’re doing. Whereas we have full-time jobs and have to take the week off to go and play so it’s not easy. But being on a plane and playing in the Champions League is out there on it’s own, it’s incredible. It was so exciting [playing in it for the first time], we couldn’t get out of our own half, it was surreal. We actually beat the top seeds in either our first or second game, a free kick from our own half, we went mental, it was unreal.”

Murphy has several highlights from her 200 appearances as she struggled to pick out just one memory. “Scoring the winner in the FAI Cup Final last year was definitely up there, my first time to score in the Aviva so that was huge for me plus my family were watching and it being the winner too was incredible. A couple of Champions Leagues ago, I walked out side by side with the Ajax captain. We found out later on that they had a budget of 5 million so to just be standing side by side with their captain, that for me was very surreal, an amazing woman. The other one would be lifting the first National League, to know that we’ve done it was huge. It was pretty special and the way we did it too was special, we beat Raheny in Raheny who were the defending champions.”

When asked about the possibility of another 200 appearances, the 31 year old laughed, replying “we’ll see, I feel fitter than I have in my ten years in the National League but one step at a time, if I can make another 20 or 30 appearances I’ll be happy. I’ll keep going as long as my body lets me and I can keep offering something to the team. I don’t want to be someone that comes on in the last 10 minutes to settle things down.”