Another national title for Marcus Lawler

ST Laurence O’Tooles, Marcus Lawler, won the Irish National 200 metres title in Morton Stadium last Sunday when he held off the challenges of the under 23 champion, Mark Smyth (Raheny Shamrocks) and 400m champion, Chris O’Donnell (North Sligo) in a time of 20.95. The runner-up and third place finisher recorded times of 21.01 and 21.17 respectively. 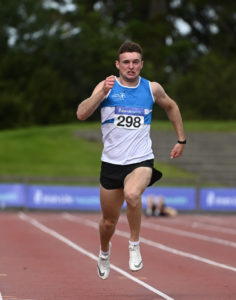 Marcus Lawler of St Laurence O’Toole AC, on his way to winning the Men’s 200m at the Irish Life Health National Senior and U23 Athletics Championships at Morton Stadium in Santry, Dublin
Photo: Sam Barnes/Sportsfile

It was massive consolation for the Carlow sprinter who had been edged into second place by Stephen Gaffney the week before in the 100m race.

The 200m event is Lawler’s preferred distance but he admits he was disappointed not to take gold in the shorter distance.

“The 200 is the one I train for and put my focus on. I was disappointed though. I left myself with a lot to do in the 100. If you don’t get a good start in the 100 you just cannot make it up. I did well to get silver. At one stage I was down the field if 5th or 6th place. I did use it for motivation coming into Sunday. I was delighted to win the 200 after that,” said Marcus.

The Carlow man did not get off to the best of starts but it wasn’t enough not to let him get back in contention.

“The start was, maybe, not as well as I would have liked but better than the 100 the previous week. I love running the bend and I think I am a good bend runner. I start better.”

The race was not without its own tension and dramatics. Gaffney pulled up quickly coming around the bend and for a moment Lawler was distracted.

“It was a little bit off-putting. I was set to reel him in and was ready to wind it up and go by him. He pulled up just in front of me and for a split second I wondered what that was about. I wasn’t too concerned. I had him just outside me and I could use him as a target to get past him going into the straight,” explained Lawler.

With 50 metres to go to the tape, the eventual winner had forged into the lead but couldn’t relax.

“I put myself in a good position going to the straight but I knew the two lads beside me were challenging. Mark Smith is good and Chris O’Donnell won the 400 last week.”

Lawler battled his way to the line to take gold. He was delighted but knows he will need to keep improving.

“The time wasn’t fantastic. A half second off my best. The three lads behind me all had personal bests. They were all firing. I was a little bit off by PB but a win is a win.”

This year Marcus would have been preparing for the Olympics. Covid put an end to that. After struggling with that disappointment Lawler is back and looking to improve.

“I am getting ready again. I am motivated to train hard again, get back on the horse and go again.

“I did a 200 in Belfast three weeks ago and the other in Cork IT a week prior to that. I have run a good few 100s as there were a lot available. We took any race we could get.”

He is finished his studies now in IT Carlow. He has decided to put everything into one last big effort to ensure he stays in the top fifty in the world (he is currently in 34th place) which would ensure Olympic qualification if Tokyo goes ahead next year. His preparation is confined as an event abroad means he has to quarantine when he gets home.

“I am getting Sports Ireland grant. That is my income. If you want to make the Olympics you have to make these decisions and really give it your full energy and be flexible,” Lawler says.

There was also medal joy for Molly Scott in the 100 metres hurdles which she won bronze with Sarah Quinn (St Colman’s and Lilly-Ann O’Hara (Dooneen) taking gold and silver.