THERE is no use pointing out to Joe Murphy, the Éire Óg manager, that his side are red-hot favourites to retain their title and complete a four-in-row. For sure you will get the standard answer that the only game his side are focussing on is their opening joust with Bagenalstown Gaels and that he is not even looking at either O’Hanrahans or Mount Leinster Rangers who are also in the group. 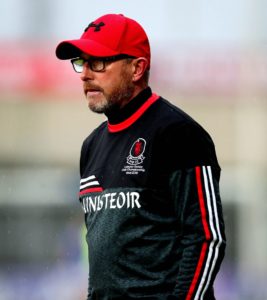 Yet it is hard not to disagree with him when he suggests, that perhaps, the championship is a little bit more open than it may have been if Covid hadn’t intervened.

“We have to squeeze a lot of preparation into a short space of time. We came back when it was permitted in July. Some guys had been doing their own preparation in their own time. Different people are in different shapes so it is about trying to get everyone into the best possible condition that we could,” he says.

“Bagenalstown will be a tough start. Rangers are after coming through a hurling championship so they will be sharp and then you have a local derby against The Blues (O’Hanrahans). They are three different games and we have to be able to respond to each of them.”

On the other side of the group come Palatine, Rathvilly, Tinryland and Old Leighlin. Four clubs who are dripping in football traditions. All four go into the fray with hopes of at least making a quarter-final. Then you never know what is going to happen then.

Éire Óg did have a friendly against Ballymun Kickhams in July when there was an initial ease of restrictions.

“They were probably a bit further on than we were. They were starting their championship the following week. We hadn’t done much ball work at that stage but it was a good game which pointed out a few things.”

So the Éire Óg man makes no promises. He has adept at not giving the opposition extra motivation to take his side down. For him his players are as well prepared as they possibly could be considering the circumstances. That is as much inside information Murphy will divulge.

“The year that is in it, and what has gone on, it is five weeks in a row if you progress. It will put a demand on panels and players. You are going to have to deal with injuries and possible suspensions. It is something we haven’t been through before. That is a great equaliser,” he suggests.