THIS interview was to be a reflection on Daniel St Ledger’s intercounty career and, with his help, a look forward to the upcoming Carlow intermediate football championship where he will be hoping to erase the memory of his club’s defeat in the final last year. His priorities have changed however. 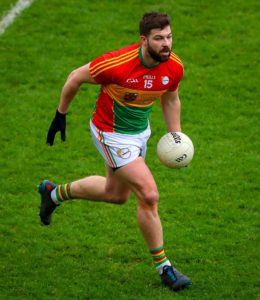 Daniel St Ledger has retired from intercounty duty but still has ambitions to fulfil with his club
Photo: ©INPHO/Tommy Dickson

The arrival of Covid and the damage and misery it has caused to so many people’s lives means such a conversation about his footballing career doesn’t sit easily on his shoulders.

The pair were able to take up the offer of accommodation in Doonbeg where they stayed until only recently. For the moment they are living in Kill.

Teaching at St David’s in Artane, St Ledger went back to school on Thursday. For teachers, it is a step into the unknown. There have been stories of schools in Europe having to close again because of the re-emergence of the virus.

Here in Ireland he has watched as the healthcare workers faced up to the Covid crisis head on. Then as shops and restaurants started to re-open workers may have been happy to get back but they had to live with the possibility of contracting the disease. Now the schools are returning. Daniel knows this is a step into the relative unknown.

“I don’t know how long it will last. Trial and error is the job. It is more to get them open and get them going again,” says St Ledger who readily admits the thought of going back and mixing with so many students and adults preoccupies him. So with all this going on around him there is no question of looking back on his intercounty career which spanned three decades.

“It seems insignificant. There are so many other things taking precedence over everything. To a certain degree there is a fear of the unknown. I am sure we will get used to it in a couple of weeks. A complete rewriting of the script for the school,” he stresses

So is there an enthusiasm for the club championship which starts next Saturday when Kildavin-Clonegal take on The Fighting Cocks in Tullow?

St Ledger loves his football. Always has but here he is actually kicking to touch on the possibility of a championship starting and, hopefully, finishing.

“As long as it is in a safe capacity. There have a number of scares around Carlow but if everything is ok and everyone was to stay fit and healthy it would be great,” he says.

“It is a constant worry that if you are supposed to be playing on Sunday, a team goes down (with Covid) and you get a walkover or give a walkover, you lose the integrity of it.”

Telling him the hurling championships has been a success helps. St Ledger is in two minds. One moment he is eagerly looking forward. The next he wonders what might happen if one or more players in any club were to pick up the Corona virus.

“When you get into the flow it might even mean a bit more, purely because of the long lay-off. I know you haven’t had the buzz of a match. I might have lost a little of the appreciation of it. I was lucky to have league and O’Byrne Cup games followed by championship with Carlow. Then I was straight into club championship.

“I personally can’t wait but at the moment I am a little bit fearful. If I go back to school and pick up something, will I be the one who will hold Kildavin back? There are so many unknowns.

“There is a great dose of perspective. I am just delighted there is an opportunity to get back playing and keeping fit. At the moment that is the height of it for me.”

Then there is the aspect of playing behind closed doors.

“There has been a lot of debate about spectators and I am lucky to be a player so I don’t have to worry about going to games. When it comes to health we are in very unsure times. As a group of players we are just very lucky to be able to play. I don’t know what it must be like for parents and family who cannot go and see their children play. From the point of view having the opportunity the play sport, to play football we are the lucky ones.”

All the time the Kildavin-Clonegal man seems to be constantly asking himself questions and keeping himself grounded. One moment the glass is half-full. The next, half-empty.

“I know sport is a great outlet. There are big things happening. It is nice to do a bit of exercise and to have games available. In the grand scheme of things if schools and the economy doesn’t stay open sport is a very small part of that. Not downplaying it as I appreciate sport gives people a release from the realities,” St Ledger reasons.

Like it or not the football championship is scheduled to throw in this week. Surely he is looking forward to it by now?

“We are playing week on week. Clubs won’t have time. I assume if a club is going to close it is going to play havoc with the championship. Look, it is great to be playing but regards championship I don’t know. It is a funny one. If you win it, it won’t mean any less. It is the unknown. You are afraid to get too excited. You are very cautious.

“It is a funny one. You are going week to week. In years gone by you would be looking forward to championship games months in advance. You would be preparing yourself. At the moment you are just talking about the next training session, the next practice match,” he says.

Time is running out for him if he is to win an intermediate championship medal with Kildavin-Clonegal and help them return to senior football. Surely he must grasp the opportunity

“There has not been a huge amount of focus on championship. I am sure that will all change. It will be unbelievable for us. We had a group of older lads going to their mid-thirties but there is younger fellas coming through now who are around the 19-21 mark who need to get up and play senior. They will be the ones carrying the flag for the next ten years. There are some great young lads there.

“Last year, while it was disappointing, the experience will stand to those young lads. There is a new energy down there at the moment. It would be fantastic to get Kildavin-Clonegal back to senior. There is a huge grá for football down here.”

And can Kildavin-Clonegal do it?

“It could come down to who stays injury free. The inclination is to try and stick six months into three months. That doesn’t work. You can see in most sports that injuries are fairly prevalent when matches come thick and fast. After a lay-off it come down to who can keep fifteen on the pitch. It will be a great leveller. It will be a cracking championship. It is always tight but it will be tighter than usual?”