Defendant gets lesson in mask wearing 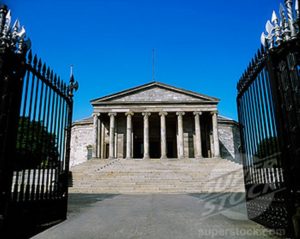 Following guidelines set down by presiding Judge Geraldine Carthy, only 16 people are deemed to be safely accommodated in the bigger of the courthouse’s two courtrooms, where last Wednesday’s sitting took place.

Masks are not mandatory but are strongly advised to be worn, except by those who are giving evidence, addressing the court or for medical or other welfare considerations. Two-metre social distancing is to be observed and seats in the public gallery are taped off to encourage this.

First, Carlow courthouse manager Andrew Cleary and then visiting judge Alan Mitchell addressed those in the courtroom about the new measures before the sitting began.

There was a high degree of compliance among all court users with masks. Two gardaí were also present to facilitate defendants in and out of the courtroom.

With gardaí, defendants and solicitors entering and exiting the courtroom almost constantly, it was inevitable that the new capacity was breached on one occasion. This prompted Judge Mitchell to request those who did not have to be in the courtroom to leave.

“I know it’s inconvenient, but the court has to be seen to be compliant,” he said.

Covid-19 has impacted court proceedings in other ways. One man sought an extension to lodge an appeal on a road traffic fine after he was convicted in his absence earlier in the year. He told the judge had not attended court under the belief that it was not a requirement due to the pandemic. Empathising, Judge Mitchell said: “It was nothing but confusion at one stage.”

Face masks also raised their own idiosyncratic issues. Judge Mitchell, who was not wearing a mask, told one defendant he was wearing it incorrectly, while another mask wearer bamboozled the court briefly.

Judge Mitchell was hearing evidence in the case of one man who was believed to be absent. However, the defendant was actually present in the room, but the solicitor had not initially recognised him.

“That’s the problem with masks, isn’t it?” said the judge.