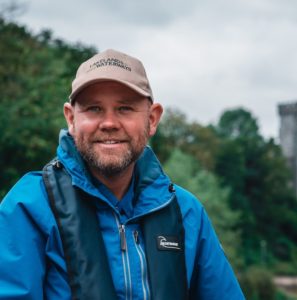 Cliff Reid at the helm

‘The Barrow is by far the most beautiful river in Ireland. It’s like travelling back in time here. Each section of the river and each valley has its own character and its own story and history’ – Clifford Reid

“THE rivers in Ireland were the lifeblood, they were the veins of the country,” Clifford Reid explains as he navigated his boat down his beloved River Barrow.

Clifford runs Boattrips.ie, a company that brings people up and down the Barrow and the Nore, using Athy, Carlow, Vicarstown in Co Laois and Kilkenny city as bases. He’s the captain of the small boat which has just five passengers on it today, each of us eager to experience the magnificence of the river.

We set off from Carlow town and travel in the direction of Athy, the journey bringing us past an old graveyard near the bishop’s house, past the sugar factory, past a sandy bank near Knockbeg College where children still swim, just like their parents and grandparents before them and through Bestfield lock.

Clifford points out a mink swimming in front of us, or explains that the heron is like a sentry at the weir, or how the electric-coloured kingfisher is ruthless with her young when it’s time for them to leave the nest.

The river incorporates the Barrow Navigation, which is a canal system that allowed merchants, bargemen, traders and farmers to all use the waterway as a route for business. Sugar beet was brought to the factory, the Guinness barges brought cereal and stout up and down the country and household supplies were traded, while cattle and sheep were also known to get a jaunt on a boat.

The tow path that runs along the riverbank was used by the dray horses to pull the barges before motors were introduced onto the boats. Today, the famous Barrow Track is used by walkers, swimmers, anglers and nature lovers. Several walkers shout out to us as we putt by them in our boat, while anglers are careful not to make too much of a fuss. Clifford recognises many of the regulars who, like him, have built up a relationship with the peaceful, majestic waterway. 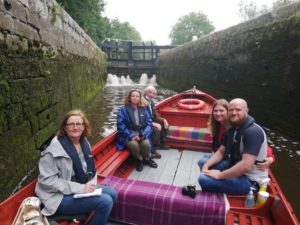 The Nationalist’s Elizabeth Lee with Joe MacDonald and his daughter, Anne Baker, Allie Teralaika and Tomás Reid on their River Barrow boat trip

Then we’re into the lock at Bestfield, where lock keeper Billy O’Neill opens the gates and lets the lock fill up with water. We’re all thrilled as the boat is elevated by the rising water and soon the other gate is open and we’re through to the other side.

“Did you know that Leonardo da Vinci designed the canal system,” says Clifford.

As he steers the boat, Clifford talks about the river and his information is peppered with nuggets of history, geography, ecology and folklore.

“This is known as the haunted lock. The boatmen were terrified of it because legend has it they’d hear someone knocking on their boats in the middle of the night. They didn’t like being here overnight so they’d travel to Carlow or Athy rather than stay here on the canal,” explains Clifford.

“Once something has a name for being haunted, the legend grows. Stories are told all along the river. Who knows the truth of it? The funny thing is, lock-keepers never learnt how to swim, so some of them might have fallen in late at night.”

Among the passengers today on the boat is Joe MacDonald, a former county councillor, who was raised on Maganey lock and who worked in the sugar factory all of his life.

When the boat approaches an old, disused dock, where the barges used to bring the beet to the factory, Joe recalls the time he worked here and how an overhead pipe used to carry water from the river to wash the precious beet before it was processed.

Clifford is keen to hear stories about the lock-keepers, the factory and the river that Joe has stored up in his memory, so the pair promise to meet up when the Covid threat has passed.

The pandemic has had a devastating impact on Clifford’s business. He usually starts the boat trips well before summer, when he brings people out to hear the dawn chorus. Or when he hosts an event for World Poetry Day and local poet Derek Coyle writes and recites verse to the passengers, then there are halcyon summer days, when prosecco and strawberries are served with a side of wonderful peacefulness.

“The Barrow is by far the most beautiful river in Ireland. The Shannon is over-commercialised, whereas the Barrow is wild and remote. It’s like travelling back in time here. Each section of the river and each valley has its own character and its own story and history,” explains Clifford.

He’s known to some as ‘The Riverman’, having become renowned for his love of boats, rivers and nature from a young age. He spent four years living on a barge in his home town of Athy and is the son of Ann Clifford from O’Hanrahan Avenue, Carlow and Martin Reid from Athy.

As a youngster, he loved to visit his aunty Bernie and uncle Frank Bolger in Kernanstown, where he spent summers fishing and swimming in the Barrow and the Burrin.

“I fell in love with the river at the age of 14 and bought my first boat when I was 16. I’ve a library of books about rivers and wildlife. I pick them up all over and keep an eye out for new titles. Some people are into cars, I’m into this. I started this business because I wanted to introduce people to the river; anyone can get onto a boat and come along. Covid-19 has had a terrible effect on our business. Overnight, 60% of our business was gone. We were busy for the month of August with staycationers, but not tourists. Now the river is rising and it’s getting cold. We’ll batten down the hatches for the winter and start afresh next summer,” smiles Clifford.

Boattrips.ie will stay open for another few weeks, so for further information, check out Boattrips.ie.