PADRAIG Amond will begin his tenth season in English league football when Newport County begin their League 2 campaign with a trip to Scunthorpe Utd on Saturday. 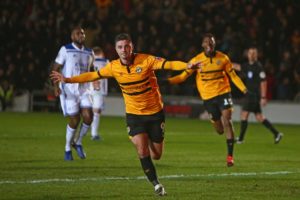 Padraig Amond will be hoping for plenty to celebrate during the 2020/21 season
Photo: GEOFF CADDICK/AFP via Getty Images

Although the league only starts on Saturday, Newport have had a busy spell recently and in typical style already have a cup giant-killing win under their belt.

Last weekend, they recorded a 2-0 win over South Wales rivals, Championship side Swansea City, in the first round of the Carabao Cup.

Amond, who will wear the number 9 jersey again this season, played the last 18 minutes of that game but was back in the starting line for last Tuesday’s EFL Trophy game against Cheltenham, and captained the side, but Newport lost that game 1-0.

After this Saturday’s game against one of the sides tipped to struggle in the league year, Newport are at home to Cambridge Utd next Tuesday night in Round 2 of the Carabao Cup. Should they win that, they will also have a home tie in Round 3, against either Oxford Utd or Watford.

Amond’s usual weekly column in the Carlow Nationalist has been on hiatus during the Corona lockdown, and he and his wife Caoimhe have also been adjusting to a new arrival in their house after recently becoming parents, but that column will be back on your pages before the end of the month.