CARLOW rower, Cliodhna Nolan and her team mate, Lydia Heaphy of Cork broke the existing world record for the distance when winning gold in the 2020 European under 23 pairs lightweight championships on Sunday in Germany. 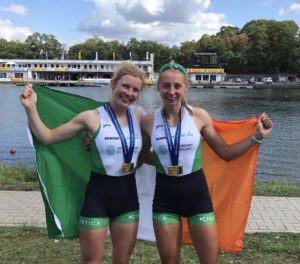 They were part of a successful Irish squad which scooped a total of five medals in Duisberg.

Competing in the under 23 Lightweight Pairs (BLW 2) event, Nolan and Heaphy won their heat on Saturday to qualify for the final. The following day they went on to beat crack Italian and German teams comfortably in the final. Other countries competing were crews from Belarus, Turkey, Ukraine and Monaco.

The following day they got the news they had taken 0.15 seconds out of the previous best time of 7.30.83 minutes for the two kilometre distance.

“We are delighted with that,” said Cliodhna.

The Irish pair stamped their authority on the final with the pair sticking to a planned pre-race strategy.

“We had a good start. We were a few seconds off Italy and Germany in the early part of the race. We started to come through them 500 metres. We made another move on 1000 metres pulling away from other crews at 1250 metres. With 500 metres to go we felt good and comfortable,” explained Cliodhna who was able to enjoy the feeling of success well before the finish.

“You have to trust your plan, that is what we did and we were delighted.”

Last year she competed in the World under 23 championships making the final with Aoife Casey in America. Nolan said she and her new team mate were in form going to Germany.

Studying in NUIG she made a decision last year to take a year out of college to train full-time in Cork where the national training centre is at Iniscarra. She is part of a four-person lightweight project. Even though they are competing against each other for selection for the Olympic Games and other events all four girls know each other well. The BLW2 event is not an Olympic category.

“We would be good friends. Four of us are trying to qualify a lightweight doubles for the Olympic Games,” said Nolan.

So far the European event over the weekend was the only championships to survive the Covid restrictions.

“Other girls will be competing at the senior European championships in October. Everyone got a race. We are all good friends and train hard all the time. It will be hard when it comes to picking the doubles when two won’t make it. We have all trained together and pushed each other on,” she admitted.

“It was so lovely to see people out with flags and banners. So many people were out with their children and their families,” said Cliodhna.

The get their fair share of sporting success in the town. Large crowds also gathered when Willie Mullins led his gold cup hero, Al Boum Photo through the streets of the small Carlow town.

“We were only saying that,” laughed Cliodhna.

Daughter of Donal and Marian, the new European champion is going to mix her studies and training this year and into 2021.

“I am going back to college. Much of it is on-line so I will be up and down to Cork,” she confirmed but did admit she was focussed on getting selected for the world under 23 championships and the Olympics in 2021.