NEW Irish under 200m sprint champion, Marcus Lawler, got an offer he couldn’t refuse last week when he was invited to complete in the Diamond Athletics meeting which took place behind closed doors at the King Baudouin Stadium in Brussels. 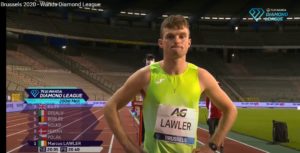 He got the word on Wednesday, booked his flight immediately and was in Brussels the following day.

After his success in the national championships the previous week he didn’t have any further races on the horizon. Then came the Brussels offer.

On his arrival in Belgium he underwent a Covid test which came back negative. He was free to compete.

Wearing his Joma sponsored gear he says he ran well but in a high class field he had to settle for eighth place.

The Carlow man doesn’t often get placed on the inside lane. He found it difficult.

“It is so tight. It is very hard to build momentum. Normally on the bend I feel ready to let loose and open up. I felt controlled and having to steer myself around the bend. It is tight to the kerb on the inside. It was difficult to steer myself around the bend. I finished last but wasn’t trailed off. I would have loved to pick off a few lads in lane 6, 7 or 8. If it was a different lane draw I do feel the result would have been slightly different.

In the rooms before the race he said the virtual crowd effects, the music and the announcements made it feel as if the stadium was rocking. Even when he went onto the track he felt the atmosphere.