Writing’s on the wall for Suicide Prevention Day 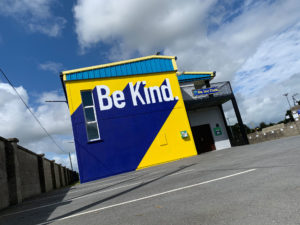 THE writing’s on the wall and the message is pretty clear – be kind!

That imperative message emblazoned on the clubhouse wall of St Patrick’s GAA Club in Tullow is all the more important today, Thursday, because it’s World Suicide Prevention Day.

“Be kind is more relevant today than it ever has been in my lifetime on this planet,” explained Paul Byrne, the artist who created the arresting graphic. “It’s a message that’s as important internally as externally because if we’re kind to ourselves it’s easier to be kind to others. It’s very apt today, it being World Suicide Prevention Day. My work centres around positive thinking and mental health. It’s a theme, using simple messages to prompt important conversations.”
Paul was commissioned to create the mural by Padraig Murphy and the committee at St Patrick’s GAA Club after they spotted his other artworks painted on the Eire Óg clubhouse (Talk It Over), at the John Sweeney Park estate (You Are Enough) and on the Baba Barber Shop (We Should Talk), all in Carlow town. 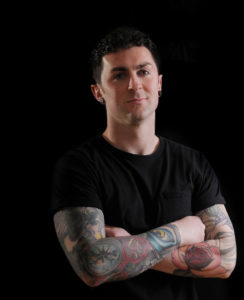 Paul, who is from Rossmore, uses his skills and talent as a graphic artist to drive the messages home in extra-large words!

“After college, I set up a graphic design company called Good Idea, but in the past few years I’ve been focussing on painting. I’m drawn to large-scale projects and I love the impact of street art. They’re almost temporary in that they aren’t mine anymore, they belong to the public. I was delighted to get involved with St Patrick’s football club on this project because they also raised money for Pieta House. It was a good project to get involved in; it was a good outcome,” concluded Paul.