BACK in the late seventies and eighties there was a hardy boyo by the name of George Brophy who played his club football in Laois. He was persuaded to try out the game of rugby with Carlow. He got on really well and ended up playing with the firsts for many years. He wasn’t that big but nothing went through him easy. He was asked one day what did he make of rugby. His answer was simple enough.

“Well”, he said. “Football and hurling. They are games but rugby is a bit like a war. You gain a bit of ground. You lose a bit of ground and then you gain it back again.”

Rugby has come a long way in the intervening years and while Brophy was not in Netwatch Cullen Park on Saturday evening to watch these two teams go head to head he might well have described what was on offer in much the same way as he described the game of rugby all those years ago. 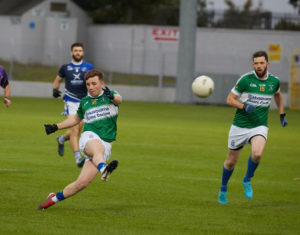 Old Leighlin’s Aaron Amond kicks the first point of the game against Tinryland, he also kicked the last Photo: michaelorourkephotography.ie

It was hard to watch. Old Leighlin will be delighted to have won a game they could well have either drawn or lost. Tinryland will be disgusted with themselves. When Danny Moran flighted over a great point to draw the game with time ticking away they were unable to stop their rivals imposing themselves and Aaron Amond finished the game as he started it when finding the posts for what were vital points in a low scoring encounter.

Amond and Niall Lowry shared early points as Tinryland got a let-off when Old Leighlin had a goal disallowed. Both sides struggled to put any sort of precision on their passing. Too often slow methodical build ups ended up with either a turnover or a hurriedly taken pot at the posts. Two Tinryland frees from Diarmuid Walshe were answered by a Seamus Kinsella placed ball. Lowry then scored his second point of the half to give Tinryland a narrow 0-4 to 0-2 advantage at the break.

The eventual winners started the second half well. Cathal Coughlan narrowed the gap on 41 minutes as both sides gave the scoreboard keeper an easy evening.

When Tinryland were penalised once and then again for infringing on the free-taker Coughlan levelled the match.

Tinryland enjoyed long periods with the ball as Old Leighlin sat back and let them play it around. The heavy shower in the first half certainly made life difficult for the teams but it was hard to comprehend what both sides were trying to do. Few players took chances. When Coughlan scored his third point in the final quarter his side were back in front since the first minute. Then came Moran’s point from distance and surely both sides would settle for a draw.

Old Leighlin showed that little bit more enterprise in the final drama. On several occasions they resisted the temptation to shoot. Instead they laid the ball off to a colleague. Tinryland defended well but eventually Amond got his chance at the O’Hanrahan end of the ground. From around twenty metres out he had enough space and limited time to nail the winner.

The former rugby player would surely have approved of the young man’s enterprise. After that he wouldn’t have that much to say about a game which took place in eerie silence behind closed doors.