Leaving out the behind closed doors aspect of this first round senior football championship in Netwatch Cullen Park last Friday this was a strange affair. 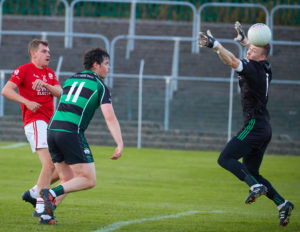 Éire Óg’s Sean Gannon palms the ball past Bagenalstown Gaels goalkeeper Ciaran Cunningham for the only goal of the game
Photo: michaelorourkephotography.ie

At one stage it looked as if the reigning champions were going to repeat their 1-30 to 0-5 semi-final victory of 2019 over the Bagenalstown side but they never kicked on. More to the point the challengers never let Carlow football king-pins build any momentum in the second half.

It all looked so predictable when Reece Denieffe and Ross Dunphy knocked over a point apiece for Éire Óg in the opening three minutes. A fifth minute free from Robbie Kane was reward for good work from the Bagenalstown Gaels side who, to a certain extent, tried to play Éire Óg at their own game by dropping players back behind the ball and then coming forward at speed when they effected a turn-over. In fact the Éire Óg attack on the turnover was slow and predictable It was the same from the kick-out where Robbie Moore generally kicked short to a colleague dropping back. In contrast the Bagenalstown side went for the jugular more often than going for a slow build-up. Perhaps that was naïve but that is their game plan which will only improve with time. Jordan Morrissey, Benny Kavanagh and Mark Furey did enough to dispossess eager Bagenalstown attacks and when they got the opportunities at the other end they gradually extended their lead. Morrisey was particularly effective slotting two frees and rifling over two more points from play.

The Éire Óg three-pointer was a route one affair where a well-placed ball into the edge of the small square created enough confusion for Sean Gannon who managed to get his hand on the ball and force it over the line. With five of the six starting forwards for the champions all scoring from play in the first half Éire Óg led 1-10 to 0-2 at the interval.

Playing into the breeze towards the scoreboard end of the ground Éire Óg were never let fire in the second half. Twice in the third quarter Cormac Mullins was given just enough space in front of goal but before he pulled the trigger the Bagenalstown defence closed him down.

At the O’Hanrahan end the champions were frustrated by poor shooting but many of the six wides registered in the second half were down to good defending and forcing the Éire Óg forwards to have a go themselves when not ideally placed to do so.

In the end the game petered out. Despite the eight point winning margin at the end there was an element of a win-win situation for both sides. If they didn’t realise it already Éire Óg will know they can take nothing for granted while a young Bagenalstown side will take great encouragement knowing they didn’t capitulate when it would have been all too easy to do so.