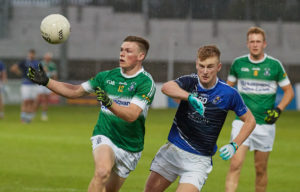 The respective moods of both sides going into this second round are polar distances apart. It was bad enough for Palatine to lose but to lose without putting up a fight was worrying for them.

Unlike the Tour de France where home fans love to see a rider winning “avec panache” Old Leighlin won’t mind they were involved in a very poor contest against Tinryland. Yet the manner of their victory, when they conceded a late equaliser but still had the wherewithal to come down and snatch the winner, showed great character.

Rathvilly looked impressive on Sunday when easily beating Palatine. The 0-15 to 1-5 margin at the end flattered the losing side. With young guns, Darragh Murphy and Jake Elliott lining up with battled hardened Brendan Murphy, Ed Finnegan and Alan Kelly Rathvilly are sending out all the right messages.

The loss of Paul Broderick and Conor Byrne in the first round deprived the blue and white hooped side of leadership and it showed against Old Leighlin. It is hard to see them bouncing back here.

The clash of the 2020 senior hurling championships versus the 2019 football champions offers an intriguing situation. The YIs were stodgy in the second half against Bagenalstown Gaels. When push came to shove, Rangers were able to carve out a victory against O’Hanrahans who overturned a six point deficit to go ahead in the second half. In a transfer system Diarmuid Byrne, Chris Nolan and Fiachra Fitzpatrick would be on the Éire Óg shopping list. Thankfully there is no such thing here so these players will more than stretch Éire Óg over the hour.

Despite defeat in their opening game against Éire Óg there was never a sense of gloom hanging over the Bagenalstown Gaels players and management team afterwards. They know they are young and developing so they are patient for the moment.

Contrast that to their opponents next weekend who had chances of beating Mount Leinster Rangers in their opening game. They were dejected and crest-fallen when the Borris side came back to take victory.

Bagenalstown could atone for their first round defeat here and precipitate a potential crisis in O’Hanrahans.

Because of a Covid scare within the club the Kilbride game v Éire Óg was called off over the weekend. Presuming the club get the all clear before Friday they will line out against a Naomh Eoin side who will be hurting after their first round defeat. Perhaps the worry and angst generated by that health scare and not having a game could damage Kilbride prospects.

Ballinabranna’s resounding victory over Naomh Eoin in the first round would suggest the side who were unluckily relegated from senior ranks last year are in the mood to come straight back up. There is still a long way to go but a win here would assure themselves of a place in the knock-out stages at least.

Two sides with serious ambitions of winning this championship come face to face in the second round. First round form indicates a close game with Kildavin-Clonegal set to take a second win on the trot.

Over the last few years the Cocks have mixed the good with the not so good. Clonmore are a bit similar. It is hard to predict this one. The Cocks will be hurting after their heavy defeat to Kildavin-Clonegal in the first round. That should focus minds.

St Patricks out to make up for previous disappointments