AT last a senior championship encounter to get the pulse racing. After the disappointing fare from the previous three games these two sides served up what could be termed an interesting head to head at Netwatch Cullen Park on Sunday. 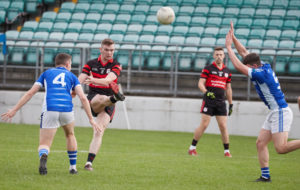 Yet the final fifteen minutes made up for what was a turgid affair up to just before the game took a wicked change in direction.

In the very first minute a route one ball to the big Daryl Hayden at full-forward for the Blues saw him deliver with a fourth minute point. Two minutes later Chris Nolan levelled with a free for Rangers and the same player added another to give his side a slight edge. A well-worked Leigh Walker point levelled the game once more and Jon Nolan restored Rangers narrow advantage going into the second quarter.

The Blues continued to look for Hayden in the full-forward line but he was ably marshalled by the Rangers defence. At the scoreboard end Fiachra Fitzpatrick was denied a goal when the Blues defenced managed to deflect his goal bound shot around their left hand post.

Gradually Rangers got on top and a flowing move was the best of their scores when they went to the interval ahead by 0-6 to 0-3.

Two Jack Murphy frees stretched their lead out and Diarmuid Byrne added another point from play. O’Hanrahans were struggling and needed Leigh Walker’s free which the intercounty player converted. With fifteen minutes left to play Rangers looked home and dry when they led 0-10 to 0-4.

Then came the drama. When Danny Thompson probed down the left his speculative shot across the goal was spilled by Gary Lawlor the Rangers full-back. To his horror, the ball hit his leg and deflected into his own net. Danny Thompson will take the credit for the goal as he was the last O’Hanrahan’s player to touch the ball but it was an own-goal all day long.

A stunned Rangers then allowed Cian Dowling in for another point. The comeback was complete when Daryl Hayden found the Rangers net with a powerful shot after the ball had ricocheted on numerous occasions in the small and big squares. O’Hanrahans almost added a third goal with Rangers glad to see the ball drift just wide of the left hand post.

The Borris side didn’t panic and hit back to level the game thanks to a Chris Nolan point from play. Their fitness from the hurling season stood them in good stead from there. Nolan was on target with a free while Fiachra Fitzpatrick set up Tony Lawler for another point. Graham Delaney replied with an O’Hanrahan point.

With Rangers unsure whether to play keep ball or continue to probe the O’Hanrahan defence in the close minutes they did eventually manufacture a goal when Chris Nolan set up Ted Joyce for a well-taken goal. With four points between them that was the killer blow but O’Hanrahans kept their opponents honest to the end with a Thompson point to leave only three between them which stayed that way in the final two minute before the final whistle.