AGAINST tricky opponents who have given them many problems in recent years Rathvilly got their senior football championship ambitions off to a good start in Netwatch Cullen Park on Sunday. 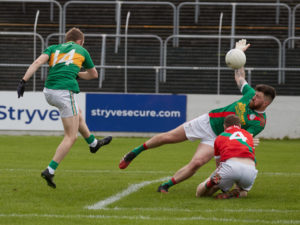 Rathvilly’s Jake Elliot has his point blank effort stopped by a stunning save by Palatine’s Craig Kearney
Photo: michaelorourkephotography.ie

In hindsight now the Wicklow border side were never going to be in trouble. They moved into gear straight from the off with Jake Elliott and Brian Smith picking off a point each from play. When Jamie Kenny replied with a point after Palatine broke quickly down the field the scene looked set for another close encounter between the two sides.

After that Rathvilly enjoyed the better of the exchanges    with Brendan Murphy, Ed Finnegan and Darragh Murphy all pointing from play. At the water break they led 0-5 to 0-1. Even at that stage Palatine were in trouble.

Immediately on the resumption Brian Murphy sold a dummy which the Palatine defence easily bought and the wing-half forward found the posts once more at the scoreboard end of the ground.

The Bennekerry side enjoyed a good spell and Conor Crowley converted two frees. In reply a slow Rathvilly build-up saw Smith knock over his second point of the half to give his side a 0-7 to 0-3 lead at the interval.

Rathvilly didn’t let up for most of the second half. They were always on top. Alan Kelly had half a goal chance but was happy to settle for a point. By that stage five of the starting forwards had scored from play for Rathvilly. It got worse for Palatine when they lost Conor Crowley to a black card after he took out Brendan Murphy off the ball. Murphy himself knocked over a point shortly which was the best answer from his point of view.

Palatine lived on scraps. Cathal O’Neill pointed and, later in the half    after he returned to the action Crowley was on target again with a free.

At one stage Rathvilly led by ten points. Jeffrey O’Donoghue then ran into referee trouble and for his trouble he saw black too for deliberately pulling down an opponent. He need not have bothered as Palatine were not showing too much penetration at that point.    Against a weakened defence Palatine engineered a penalty. Crowley held his head and shot low to the bottom right hand corner. It wasn’t lost on Palatine connections that the goal was only taking the bad look off the scoreboard.

In the meantime Rathvilly had the points in the bag and saw out the final moments without any drama. A job done, potentially difficult opponents put away and now for Tinryland next weekend.