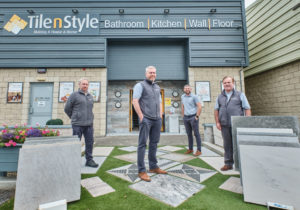 There are wonderful celebrations in Tyle n Style’s store in Shamrock Business Park as the Horohan family mark 18 successful and happy years in business.

For the month of September, they’re running a sale called Marquee Madness where there are hundreds of bargains to be discovered with tiles, wooden flooring and bathroom suites reduced to rock-bottom prices. There’s stock from Spain, Portugal and France as well as India and South America.

“We’re always on the look-out for new styles and trends so we usually travel to trade shows in Europe. That way, we’re always ahead of the curve, in terms of styles and product,” Bernard Horohan, the owner, revealed.

He’s in celebratory mood as he looks back on 18 years ago and remembers what prompted him to set up the shop in the first place.

“My wife, Vicky, and I were renovating my grandparent’s, Jim and Moll Horohan’s, place on JKL Avenue at the time. We were looking for new tiles and compared what we saw in Carlow and what we saw in Dublin. It was phenomenal! The difference was chalk and cheese, with the range of products in Dublin being so much better. I decided then that I wanted to set up a shop there and then,” Bernard explained.

Bernard’s first premises was opened in 2002 on Kennedy Street and it later moved to Shamrock Business Park in 2005. Even from those initial early days, Tile N Style stood out from the rest. Bernard had no previous experience in tiling but he did have a college degree in construction studies, a great eye for colour and design, and of course, a fantastic relationship with his customers.

Among the services they provide is one-on-one consultations, home and site visits, and plenty of great advice.

“We provide a great service for our customers. We’re always on the other end of the phone,” Bernard pointed out.

This dedication to customer service was particularly important during the weeks of the strict Covid 19 lockdown when people turned their attention to renovating their homes. Though the shop was closed, Bernard organised consultations and meetings with his customers on-line and in private appointments so that everyone was safe and secure.

“We always give people plenty of time and go the extra mile for them,” Bernard added.

Over the 18 years in business in Carlow town, Tile N Style have been known for their generous sponsorship of charity events and sports clubs, including soccer clubs and GAA. Bernard’s love of sport led him to manage the county minor team for two years while he’s also coached at many levels in his beloved O’Hanrahan’s GFC. His voice is well known across the county and beyond as one of his favourite past-times is commentating on GAA games on KCLR with sports commentator, Brendan Hennessy. The Horohan family have also, in recent years, raised an incredible €12,500 for the Carlow/Kilkenny Homecare Team.

“We like to give back to our community, people have been very good to us so we try to give something back to them,” Bernard smiled.

The Marquee Madness sale continues for the month of September and will feature massive reductions, some up to 70% off tiles, flooring and bathroom suites.

Thinking of doing up the house? There’s no better time than now!