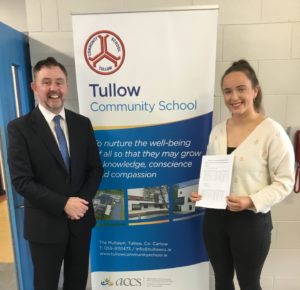 ANArdattin teenager celebrated with her family after she scored a magical 625 points in her leaving cert.

Eighteen-year-old Áine Sinnott, a former student of Tullow Community School, got a remarkable six H1s in maths, Irish, German, accountancy, chemistry, and design and communications graphics, (DCG) and a H2 in English, giving her the highest score that’s considered by the CAO.

“Áine worked very hard and was very committed from day one. We knew that she was very good – she got 11 As in the junior cert – but we were still surprised when she got 625 points. We’re delighted for her!” Margaret, her mother, told ***The Nationalist***.

Margaret is a Balfe originally from Rathvilly, while Áine’s dad is Jim, who’s a farmer in Ardattin. Áine also has three older siblings, Carol, Laura and Eimear, who are just as proud of her.

Her ambition is to study management science and information system studies in Trinity College, Dublin. Áine is not just clever academically, she’s also sporty and is a member of St Anne’s football team in Tullow, which won the county final.

In 2018, when she was in fifth year, she went to India with the Hope Foundation, having raised significant funds for the charity.

Her mother gave credit to Ardattin NS for giving her a great academic start in life and Tullow Community School, whose teachers encouraged and supported the bright scholar to achieve such fantastic success.

Tullow CS principal Paul Thornton said that Áine’s brilliant results were “a fantastic outcome, which was gained through her consistent hard work and study over the years”.