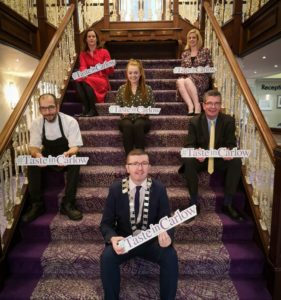 BUSINESSES that work in the food and drink sector in Carlow will be able to promote their offerings in a new campaign.

Carlow County Council’s Local Enterprise Office (LEO), in partnership with KCLR and supported by Carlow Chamber and Carlow Tourism, has launched the ‘Taste in Carlow Tour’. It aims to promote all things food and drink from Co Carlow.

The tour involves a series of outside broadcasts with KCLR, which will feature stories from local food and drink producers and hospitality establishments such as pubs, restaurants, hotels and coffee shops. The tour will visit Carlow town, Tullow, Leighlinbridge and Borris over five dates during September and October and local businesses can get involved by contacting the LEO.

It will start in the Woodford Dolmen Hotel, Carlow this Friday, 18 September, and will then visit Tullow (25 September), Borris (7 October), Leighlinbridge (8 October) and Carlow town on 28 October.

Welcoming the project, Carlow County Council cathaoirleach Tom O’Neill said: “Co Carlow is home to some of the most fantastic restaurants, cafés, gastro pubs, food and drink producers and this project is all about showcasing this talent to local and regional consumers and encouraging them to buy and experience locally in terms of food and drink.”

Cllr O’Neill added: “We have a unique food and drink heritage, which is undiscovered to many, and the idea of the Taste in Carlow Tour is to promote all things local that are there to stimulate the senses in terms of food and drink.”

Speaking about the benefits of the project, LEO enterprise executive Áine Carey said: “This project builds on our Shop Local Project and this time they will be targeting local food/drink producers and those in the hospitality industry. This includes local coffee shops, food establishments, pubs of all types and food and drink manufacturing companies. As part of the shows, businesses will have the chance to promote their business and tell everyone their story. It is time to show people what Carlow has to offer.”

Ms Carey also lauded the platform that KCLR will provide to promote the Taste Local initiative.

Another LEO initiative, the inCarlow Food and Drink Forum, will be established later in the year. Its head of enterprise Kieran Comerford said that LEO wants to build the foundations to promote the sector in a co-ordinated way from 2020 onwards. The council also recently received €35,000 for the development of the inCarlow Taste Trail as part of the Town and Village Renewal Accelerated Scheme.

Filed under: food and drink

McDonald’s reopen for diners in Carlow

Carlow pub does a roaring trade with growlers and cocktails!