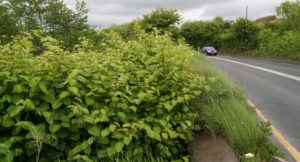 This would include mapping invasive species in Carlow and developing a programme to maintain them. Japanese Knotweed, Himalayan Balsam and Ragweed were all mentioned as problematic and present in Carlow at September’s meeting of Carlow County Council. Ragweed, for example, said cllr Brian O’Donoghue, was particularly damaging to livestock.

The difficulty in tackling these plants was also highlighted. Cllr McDonald said Ragweed needed to be sprayed twice a year, in April and September.

Director of services Padraig O’Gorman said Japanese Knotweed needed to be injected with chemicals over a four-year period.

People Before Profit’s Adrienne Wallace warned against the use of weedkiller containing glyphosate. She said there was evidence from the World Health Organisation that glyphosate was related to cancer.

Cllr Charlie Murphy had a firm rebuttal. “Weeds need to be killed, and the best in the tool in the armoury is glyphosate.”

Cllr Fergal Browne wondered if products like Gallup could still be used in the maintenance of verges. “Otherwise there will be major problems at junctions around the county,” he said.

Mr O’Gorman said the council could use sprays such as Gallup, but the policy may also lead to alternatives. “If we can get more bio-friendly treatments, this will help us identify them,” he said.