ÉIRE Óg won a breath-taking and exhilarating Minor Football Championship A final on Monday in Netwatch Cullen Park which went all the way to extra-time and penalties. It is probably being dramatic to suggest a video of this game should be shown to football coaches nationwide but it was hugely entertaining. 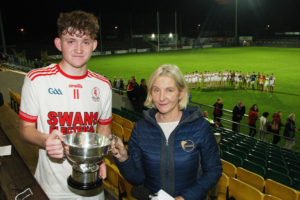 There wasn’t a dirty belt in an encounter which flowed from end to end over eighty minutes plus injury time while the fear of losing never seemed to enter the minds of either team.

At the end there was heart break for Rangers but for this Éire Óg team who were beaten by a cricket score two years ago by Rangers at under 15 level this victory is akin to the feats of Lazurus and look what he did.

Rangers held an early 0-5 to 0-2 lead with Player of the Match, Donagh Murphy, scoring five first half points. That didn’t save his side from trailing 0-8 to 0-6 at the break.

The first goal was a scrappy affair with Jack Murphy credited with getting the vital touch for a 43rd minute goal. Rangers hit back with a similar three-pointer when Brad Bolger scored from close range.

It was edge of the seats stuff with the eventual winners grimly holding onto a 1-11 to 1-10 lead going into injury time. Cometh the hour, cometh the man and Murphy equalised from play for Rangers. And so it went to extra-time.

45 seconds in Joe Dundon was at the end of a sweet passing movement to score a great Rangers goal. Robert Stafford added a point.

Even though Eoghan Byrne reduced the margin for the YIs Murphy’s eleventh point looked to have been the insurance for Rangers.

And so it went to penalties. In the battle of mind games Éire Óg came out on top to win 4-3. Behind closed doors or not it was a terrible way to lose a county final but for the Pairc Ui Bhriain boys what a way to win. 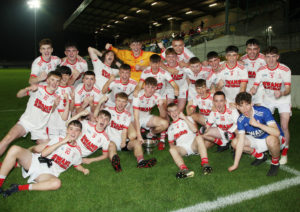 St Patricks out to make up for previous disappointments