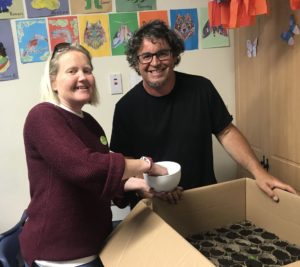 By Elizabeth Lee
ARTIST Michael Fortune began work on a gorgeous project in May, when people were encouraged to grow their own scallions.

While neighbouring counties are known as The Lilywhites and The Garden of Ireland, Carlovians’ nickname is ‘the Scallion Aters’. Working alongside community arts group Take A Part Carlow and the Arts Office of Carlow County Council, Michael initiated the Scallion Aters project.

All parties were aware that people were missing out on social occasions, so a plan was put in place to give 150 seed packs containing scallion seeds, badges and colouring pages to homes all over the county. May was a strange time for many as they navigated the lockdown, so this small-but-significant project offered something positive. In the weeks that followed, Michael received photos from homes across Carlow and beyond, from parents of their children colouring their pages, wearing their Scallion Ater badges proudly, but most of all sowing, planting and minding their little patches of scallions.

In the weeks and eventually months that followed, the scallions grew and now in September – or in the Irish, Meán Fómhair, which translates as Middle Harvest in English – it is time to harvest and feast on their delicious crops.

“You won’t be eating scallions for weeks from the little patches,” explained Michael. “It was never about quantity but more the chance for people to watch something grow and to have an understanding of time and also the food they eat and produce.”

The Scallion Ater project began in 2018 as part of Michael’s work with Take A Part Carlow, a socially-engaged arts collective based in the Tullow Road area of Carlow town. Since then, every year the idea has simply grown and grown. This year’s strand of the project shifted greatly because of the Covid-19 lockdown. The group couldn’t go into schools and promote the project as in previous years, so everything was undertaken remotely via post, local media and social media.

Michael is currently finishing off a series of short films in the communities that grew scallions this year. If you received a scallion-sowing pack and want to be involved, there is still time so please contact him at [email protected].

The project will be launched on Thursday 22 October at an online event, where Michael and the people involved will share films, stories and anecdotes about their involvement in the project and being a proud Scallion Ater!

For information on Take A Part Carlow, visit www.takeapartcarlow.com. For further details, contact Carlow arts officer Sinead Dowling on 086 8200247 or via email at [email protected].