Landowners thanked for their co-operation in making roads safe 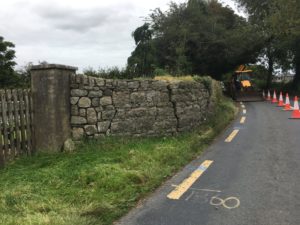 THE CO-OPERATION and goodwill of landowners was described as vital in helping to save lives at some of the county’s most dangerous junctions.

At Tullow Municipal District’s recent meeting, a number of road improvement works were discussed, including works at Tullow’s Snowball Alley and Bishop’s Cross and also at Tobinstown Cross.

All required the support of private landowners to improve sightlines and safety, with councillors and officials effusive in their praise.

Cllr William Paton described the recent work at Snowball Alley as an “outstanding success” and thanked landowner Marion Matthews for her support on the project.

He also gave credit to landowner Charlie Moore for his co-operation on road works current underway at Bishop’s Cross. At Bishop Cross, the council is removing a granite wall in order to push the boundary back two metres, making the road safer.

Cllr John Pender described the danger experienced by residents exiting at Snowball Alley for many years and thanked area engineer Pat Harrington for his “diplomacy and skills” in working with the residents to resolve the issue.

“That job is going to save lives and I feel we should write to the residents involved and thank them for their co-operation,” added cllr Pender.

Cllr Brian O’Donoghue raised the issue of Tobinstown Cross, describing it as a “pet project of mine since elected onto the council”.

Mr Harrington stated that work on Tobinstown Cross was continuing, with a new wall being constructed to improve sightlines.

“All the items we have discussed here would not be possible without the goodwill and co-operation of landowners,” said Mr Harrington. “Landowners working with us … without them, our job would be impossible; they help us in what we want to do,” he added.

Cllr Paton said the word needed to go out that council staff are “more than willing to engage” with the public on issues in their area. “An open conversation can be had,” he assured.