Trip to Canada could be life-changing for little Coco 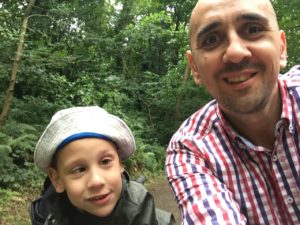 THE family of a six-year-old boy who has cerebral palsy has appealed for support in raising €15,000 so that he can get laser treatment in Canada.

Little Cosmin Manole, known as Coco, was born in Romania in 2014, but his parents Razvan and Christine moved to Ireland for a better life for him, settling in Friar’s Green, Carlow town. Since then, Razvan has become Coco’s full-time carer while Christine is attending Trinity College to study social policy. Razvan has devoted his time to improving Coco’s life and has spent years home-schooling Coco and trying to improve his mobility and cognitive skills.

“We left Romania because society there is not suitable for children like Coco. To walk down the street in Romania, you would never see children in wheelchairs or with Down Syndrome. They are hidden away and are seen like a curse. Here, we have built our lives around Coco,” explained Razvan.

He continued that his home-schooling of Coco involves intensive therapies that have greatly improved his physical condition and that after some research he discovered a laser therapy by Dr Fred Khan, a retired vascular surgeon, who is based in Toronto, Canada. Razvan wants Coco to get tested for the therapy and is convinced that the treatment will repair the damage that caused his son to have cerebral palsy.

“With this therapy, Coco would have a good chance of becoming a completely functional child,” said Razvan.

The family had support from the community in Carlow earlier this year, when staff at the leisure centre in the Seven Oaks Hotel raised over €2,000 to buy Coco a special mobility bike. Now Razvan and Christine are appealing for funds so they can get Coco to Toronto, where he can be tested for suitability for laser treatment.

“Laser therapy is not known to many parents in our situation. Can you imagine the impact that would have in the spectrum of brain-injured children in Ireland if it works with Coco? More parents would be able to save their children,” said Razvan.

“We are hard workers and we’re not used to asking for money, but sometimes you need help and we do need help now.”

He has started a fundraising campaign on the iDonate website.