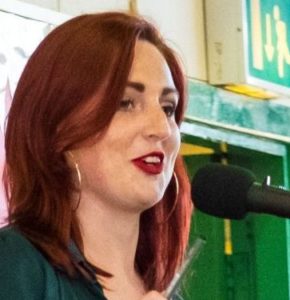 COUNCIL officials were accused of being “quick to judge” after a man presented as homeless recently according to a county councillor.

Cllr Adrienne Wallace criticised the council’s handling of an individual, who had recently presented as homeless. “The way he was treated was absolutely shocking. Twice, I had to get his applications looked at … twice.”

The People Before Profit councillor claimed that the man had “naively” filled out a form incorrectly and she had gone to address the matter with officials. “They told me there was no point letting him refill it as he was only going to lie,” she said. “We seem to have culture here of unelected officials being very quick to judge.”

She added: “When someone presents as homeless, they should be listened to and treated with respect.”

Cllr Wallace added that the man later contacted her looking for suicide-prevention bodies. “I had to say, there is f–k all here for you. It’s extremely stressful. We need to get serious about it,” she declared.

After the contribution, several councillors from various parties spoke glowingly of the housing department staff, complimenting them on their efforts.

Director of services Michael Brennan said there was a “culture of assistance and helping” in the department. “It’s important to get the facts straight,” he said. “The staff are extremely accommodating and helpful … I refute your allegation.”

“These are the facts, Michael,” replied cllr Wallace.

Cllr Wallace highlighted worrying figures about the homeless problem in the county. Last month, 42 adults and children presented as homeless to Carlow County Council, up from 13 the month before.