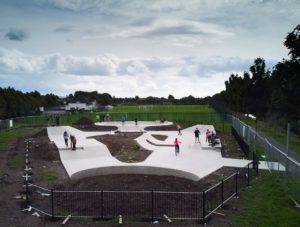 Children playing in the unfinished skate park on the Burrin Road in Carlow at the weekend
Photo: michaelorourkephotography.ie

Cllr Fergal Browne congratulated everyone involved with the new skateboard facility in the linear town park. “I met one guy, a past pupil of mine, who had been there for five hours. He was having the time of his life,” he remarked.

Cllr Browne said a local paper had taken a different slant on the skate park. This was in reference to a recent story published in The Nationalist about the large number of youngsters using the skate park that was still under construction and the potential health risks it posed.

“The sooner it’s opened officially and secured proper, the better,” said cllr Browne. “Who knows? Maybe we’ll get skateboards ourselves!”