IT’S a pivotal weekend in the Carlow Football Championships with the semi-final line up set to be completed. KIERAN MURPHY looks ahead to all the action. 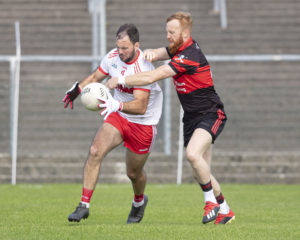 For the underdogs, who only lived down the road from the Reds, there is nothing better than a match against Éire Óg to get the blood flowing. They will be up for this and while the respective fortunes of both sides are polar distances apart there is a bit of spice attached to this final group game. In Danny Thompson, Simon Doyle and Graham Delaney the Blues have three quality players who would get into any club team in the county and further afield. Then there is Daryl Hayden at full-forward. Éire Óg know this only too well and Sean Gannon, Eoghan Ruth and Mark Fitzgerald will be taking nothing for granted. It won’t be a cake-walk for the reigning champions.

They might not want to see it here but Old Leighlin have been the most disappointing team in any of the championships so far. Credit where credit was due but they fought back well to beat Tinryland in their opening game. Surely they were only going to get better after that? That is not how it turned out and while defeat is hard to take it was the manner of their loss which hurt when Palatine ousted them at the weekend. Rathvilly are flying and on the evidence so far will surely be top of the group on Saturday evening.

Hamish Beaton, the Bagenalstown Gaels manager, talked about his young side learning as they go along. Well after two tough games against town sides, Éire Óg and O’Hanrahans, they could be facing a teak-tough physical encounter. They have to win here and even if they do they could be depending on results elsewhere. JJ Lambert, the O’Hanrahans manager, talked about Rangers being a big team. He could have added they are also fit and physical. It is hard to see a young and developing Bagenalstown side mix it successfully with the Borris side.

The form guide in horse-racing is sacrosanct. It is what drives every decision by punters and the bookies when they go into battle.

Last time out it looked as if Palatine had turned a corner when they dished out a hiding to Old Leighlin. Tinryland have only scored 0-13 in two championship outings. It is true they were with Rathvilly except for those five minutes where they conceded three goals to the Wicklow border side. It is fair to ask were Rathvilly in full gear for the remainder of the game? The second round evidence suggests Palatine turned their season around after a dismal first round showing against Rathvilly when they beat Old Leighlin. Form indicator points to Palatine.

Ballinabranna were brought down to earth with a bang over the weekend when they were ousted by Éire Óg. What must be worrying them even more was their poor scoring total of 0-7 in that game.

Kilbride lost to Naomh Eoin by two points and may be in a better frame of mind to bounce back.

Two form teams come face to face. Éire Óg won’t need reminding they were in control against the Myshall team last year but contrived to lose. That will focus them but it might not be enough. 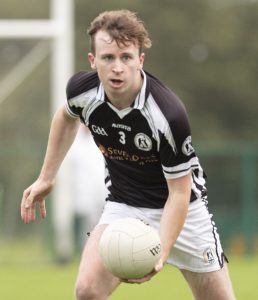 At the start of the championship PJ Byrne, the Fenagh manager, expressed confidence that his side and the junior A winners last year were ready for the step up. That was vindicated with their eight point win over Kildavin-Clonegal at the weekend. They are assured of a place in the knock-out stages and should win here. 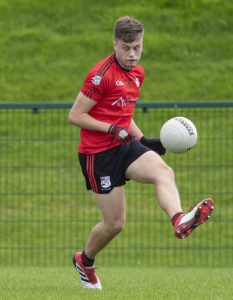 Clonmore folk were not happy that they were written off in this column last week but they must have been even less happy with the fare their players served out on Sunday against The Cocks. Then again Kildavin-Clonegal, who were fancied by many to go the whole way, were shocked by a youthful Fenagh team last weekend. Clonmore may be in a better position to improve going into the final group games.

Both these sides went down in their opening two group games so something has to happen here. It is going to be tight.

Taking their respective games against form team Grange in the group a tentative vote goes to St Patrick’s.

Having put up some nice scoring totals booth are already through to the semi-finals.

Two sides meet who are having contrasting fortunes in the competition. Has to be Grange.