CARLOW’S Ed Byrne has been named among the substitutes for Leinster’s Heineken Champions Cup quarter-final against Saracens tomorrow at Aviva Stadium (KO 3.00pm, live on BT Sport and RTÉ Radio). 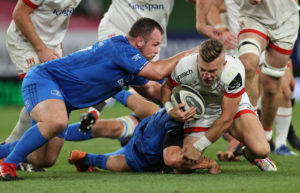 Johnny Sexton will captain the side with two players, Hugo Keenan and Will Connors, making European debuts from the start and a third, Ryan Baird, from the bench.

Jordan Larmour is selected at full back and the former St. Andrew’s College man will win his 50th cap for Leinster in the number 15 jersey.

Keenan will make his European debut on the right wing with James Lowe selected on the left.

In the centre once again Cullen has selected Robbie Henshaw and Garry Ringrose as his partnership.

In the half backs, Luke McGrath starts at scrum half alongside captain Sexton.

Cian Healy will become the fourth most capped Leinster player of all time when he pulls on the number one jersey tomorrow. The Clontarf native is closing in on Jamie Heaslip who is in third place on 229 caps.

Seán Cronin is selected alongside Healy in the front row as is Andrew Porter.

Finally, in the back row, Caelan Doris will start at blindside flanker, with Will Connors selected at openside and Jack Conan at number eight.

Elsewhere the bench, Ryan Baird is another player in line to make his European debut should he be introduced against the reigning European champions.