Historic cottage for sale in Rathvilly 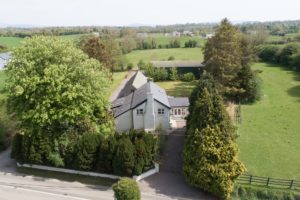 AN historic cottage, once part of Lisnavagh estate in Rathvilly, is up for sale.

The residence is called Ballyoliver but is known locally as ‘The Herdsman Cottage’.

“Ballyoliver started life as an abode for the herdsman of the nearby Lisnavagh estate. Lord Rathdonnell, owner of Lisnavagh, was one of Ireland’s foremost breeders of shorthorn cattle at the time,” writes Ally Bunbury.

“As president of the Royal Dublin Society, he was also closely involved with both the Spring Show and the Dublin House Show. The herdsman played a pivotal role in the maintenance of the cows, heifers and calves that grazed at Lisnavagh during the last decades of the 19th century. Among the most successful of Rathdonnell’s prize bullocks was Anchor, which won contests across England, Scotland and Ireland.”

Ballyoliver, close to Rathvilly, was ideally suited to host the annual auction of the Lisnavagh livestock every November during the late 1880s and early 1890s. The cattle, sheep and horses were often carried onwards to their new farms by the Great Southern and Western Railway line from Rathvilly station.

Ally explained that local lore mistakenly claims that the townland of Ballyoliver is named for Oliver Cromwell; the name is found at least as early as a 1303 survey in ***Red Book of Ormond***. “The land was formerly owned by the Lockwood and Whitty families but appears to have been taken up by the Bunbury family, of which Lord Rathdonnell was the head during the mid-19th century.

“The late Bill Burgess recalls the house as home to Old Johnny Bramble, Rathdonnell’s herdsman, who rode about on a white cob before the First World War. With the destruction of the Royal Irish Constabulary barracks in Rathvilly during the War of Independence, it appears that Ballyoliver served as a temporary residence for the policemen.”