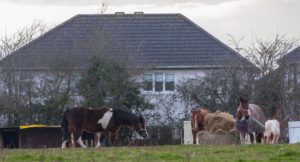 The proposed by-laws include an emphasis on the welfare of horses
Photo: Michael O’Rourke

NEW by-laws that would ban horses being kept in urban areas in Carlow will not go on public display due to question marks over their legality.

Councillors were due to approve putting the by-laws for the control of horses in Carlow, Bagenalstown and Tullow on display at their September meeting last week. However, serious questions arose over areas that were not included in the by-laws and also whether the by-laws should have been dealt with at municipal district level.

The by-laws were eventually deferred by council management, prompting one councillor to say that presenting the by-laws in the first place was “ridiculous”.

The proposed regulation would ensure that “a person shall not keep, ride or drive a horse” in the electoral areas of Carlow Urban, Bagenalstown Urban and Tullow Urban and that horses would not be permitted to graze on public places in these areas. The by-laws also include an emphasis on the welfare of horses and state that a person shall not permit anything to be done to horses to cause injury, suffering or endanger their welfare. People who have horses under their control must also not over-drive or overload the animals.

The by-laws were initially widely welcomed at last week’s meeting. Cllr Fintan Phelan said: “Far too long in different places you have had horses roaming freely in green areas. Families with children cannot even enjoy green areas and open spaces as they are too dangerous.” However, he said the area targeted by the guidelines was the “old urban area” of Carlow town and that several places where there have been problems with the control of horses were not included.

“There are glaring gaps missing in Carlow town,” he added.

He looked for the by-laws to be extended to cover these areas and director of services Michael Brennan agreed that this could be examined.

Myshall councillor Charlie Murphy stated that the problem was not confined to the county’s main towns. He had received several calls about uncontrolled horses “in an area not too far away from me. The problem is you’ll have one horse in one minute, two horses the next minute and then ten horses the next”.

He suggested a countywide ban. However, Michael Brennan said a countywide ban would be “quite Draconian” and possibly illegal. “If we designated the whole county, we could be in a bit of trouble,” added Mr Brennan.

People Before Profit’s Adrienne Wallace wanted a delay on the public display of the by-laws to allow a review with Travellers’ representatives, who have a “long-standing culture of care for horses”.

The general consensus among councillors was to push ahead with the public display, but issues with by-law areas remained unresolved.

Cllr Fergal Browne said that delaying action could put the council at risk if, for example, a young child was injured. “There was a case made against the council before,” he added.

Another wrinkle emerged when Labour’s William Paton said the issue had not been discussed at municipal district level, where these matters could have been teased out.

“There are settled Travellers in Tullow that are the most decent people you could meet,” he added. “I would not like to see these by-laws punish people who are looking after their horses.”

Cllr Paton proposed that the by-laws go back to the municipal districts for discussion. He also suggested that legally the by-laws should have been dealt with at that level. He then highlighted a recent anti-begging by-law, which had only gone through the Carlow Municipal District.

There was a bit of discussion among council management on these points and Mr Brennan said the matter should be “deferred” for further consideration.

“It’s important that whatever we do has legal standing”, he said.

On a related matter concerning the duration of council meetings being reduced to around two hours due to Covid-19, cllr Tommy Kinsella said it was “ridiculous” that councillors had spent a valuable 30 minutes talking about by-laws that had not been ready.