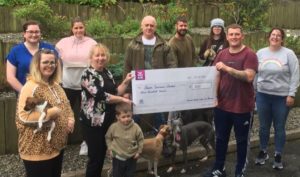 The group’s presentation to BEAM in Bagenalstown

A COMMITMENT to support a number of local charities is a promise that had to be honoured despite all the challenges of 2020.

That was the encouraging approach of Cumann Madraí Oibre na hÉireann or the Irish Association of Working Dogs, which pulled together recently to raise funds for five charities include two from Carlow.

The national organisation has a number of members from Co Carlow and had planned a show in Fenniscourt, Bagenalstown back in March.

However, when Covid-19 struck, the show had to be cancelled. Another of their shows was cancelled in June, while their biggest show of the year, a two-day event to take place in November, now seems unlikely to go ahead.

“We had intended to make a donation to BEAM in Bagenalstown from the show in Bagenalstown,” explained club member Dermot Lawless from Leighlinbridge.

“We had three shows in total that had to be cancelled, but we had all these prizes ready so we decided to raffle them online and give the proceeds from the raffle to the charities which would have benefited from our shows,” he explained.

The raffle of all sorts of items popular among dog enthusiasts was a real winner online, raising a terrific €1,600.

Using this funding, the group donated some lovely garden furniture to St Lazerian’s House in Bagenalstown, allowing its residents the opportunity to speak to their loved ones out in the open air at a social distance.

A similar donation was made to Boyneview Nursing Home in Meath.

The group also donated €300 to BEAM in Bagenalstown and to Our Lady of Fatima special school in Wexford, along with the suicide prevention charity SOSAD, which is based in Drogheda.

Dermot explained that the group brings together people with an interest and love of dogs like whippets, lurchers and terriers and the sport of hunting in a controlled, responsible way. Educating future generations is also an integral part of what the organisation does and this plays a big role in its activities on show days.

On behalf of the Irish Association of Working Dogs, Dermot thanked everyone for their support of the online raffle.