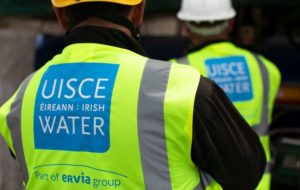 Irish Water have voiced their concern about an Ardattin housing project

PROPOSED houses for Ardattin remain in limbo after concerns were raised by Irish Water.

“It’s stuck and stuck solid,” he said. “It was brought to planning and left languishing for a year. It could not be moved. Eventually it did move on without any amendments.”

Cllr Murphy said Irish Water had now raised concerns two-and-a-half years after the houses were first proposed. He also said that money had already been allocated and a verbal agreement had been made with the landowner.

“Two-and-a-half years this has been going on … if this happened in the private sector, I do not know what the consequences would be.”

Fine Gael’s Brian O’Donoghue appeared to suggest that the topic of the houses was to be on the council’s agenda but had been pulled following Irish Water’s involvement. Cllr O’Donoghue said that planning permission had recently been granted for 18 houses in Tullow and he was confused as to why there was a question mark over these houses in a “perfect site”.

Director of services Michael Brennan said the council was working on the matter and there was a concern about capacity.